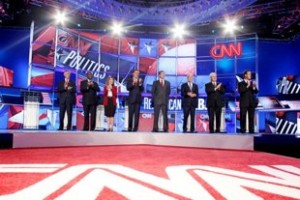 Newt Gingrich had the line of the night towards the end of the debate when he complained that the moderator encouraged a level of bickering that could only make it harder for the GOP to get the White House.

I don’t think Anderson Cooper was really trying to sink the Republican nominee for President in this debate. He was trying to make an 8-person debate interesting for television. But, if the bi-product is to make all the candidates look silly, well, mission-accomplished.

As Mitt Romney has tried to point out occasionally, we live in complicated times and sometimes the simplest answer is not always the best answer, but giving nuanced explanations in 30 second sound bites is damn near impossible, especially when you have a moderator asking your fiercest opponents to tear your ideas apart in a brief rebuttal.

Most avid Republican primary voters probably have heard that Mitt Romney has a 59-point plan to reform government and revive the economy, but I bet you only two people outside the media and Romney campaign have actually looked through it. Newt Gingrich has a new contract with the American people. Nobody knows anything about it and I am sure all of the other campaigns have their own plans, even Rick Perry.

But no plan is as exciting as Herman Cain’s plan. You know why? Because it is easy to understand and it fits into a 30-second sound bite and makes for great fodder for faux debates like the one hosted by CNN.

In CNN’s defense, their debate is par for the course. Maximize bickering, minimize complicated discussion. That is what we get in the world of pre-primary debates.

In this world, Newt Gingrich thrives. He has set himself up as the man most likely to beat up both President Obama and the national media. He just loves to whack the 4th Estate members who deign to ask him a question. And he clawed his way back into the race because he is so good at showing that he has policy depth just as he is taking one more whack at the people the Republican base hates so much.

Romney and Perry clearly don’t like each other very much and I can’t say I blame them too much. Romney has reason to be peeved at a Perry campaign that keeps raising questions about the Mormon religion. Perry has to be pissed that Romney has called him a slacker when it comes to enforcing immigration laws.

Perry probably should be pretty careful about attacking Romney on hiring an illegal alien. My guess is that the Texas Governor is a good deal less pure on this issue that he likes to let on.

Once again, critical questions weren’t really asked: Who is your first hire when you become President? What powers will you give your Vice President? How will you run your cabinet? How will you engage OPEC, APEC, ASEAN and NATO? How will you manage your White House staff? When you hire staff, what is your highest priority: Political loyalty or competence?

These debates provide little insight into how these candidates will actually govern, which is too bad. That is only thing that really matters.