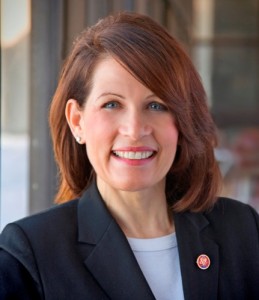 I caught some of Michele Bachmann's appearances as I drove down to Florida on my family vacation.  She was doing one of the Sunday talk shows after her Ames, Iowa victory, and she sounded articulate and smart enough to hold her own.

The Republican Party of Iowa has already had an outsized influence on the GOP primary process.  By elevating Bachmann and the Libertarian Ron Paul over Tim Pawlenty, the Straw poll voters knocked out the former Minnesota Governor.

Tim Pawlenty made an attractive candidate on paper.  He had a good record.  He is a nice guy.  He is plenty conservative.  What he didn’t have was a compelling message.  He wasn’t crazy enough to appeal to either the Bachmann or Paul supporters (or the Herman Cainers either), and he wasn’t establishment enough to attract Mitt Romney type money.

I believe and continue to believe that if he portrayed himself as a warrior for the middle class, he could have made a bigger dent in the campaign.   Instead, he kind of wandered from one message to another, at one point warning the party that it was becoming too isolationist, at another, claiming that he was a reformer with results, ala George Bush.

Talking about out-sized influence, Governor Rick Perry decided to announce that he was running for President at the Red State Convention of bloggers.  The Red State website is not for the faint of heart.  It spends the majority of its time attacking Republican leaders in Washington, and the rest of the time lacerating Mr. Obama.

By opening his campaign with the Red Staters right after praying with the evangelicals in Texas, Perry is making no secret of his campaign strategy.  He is going hard right.  It worked for him against Kay Bailey Hutchison, and he expects it to work this time around.

Perry’s candidacy is obviously pretty problematic for Michele Bachmann.  He has a deeper record of accomplishment than the Minnesota dynamo, and he is every bit as right-wing as she is.

Mitt Romney, who decided not to play in the Ames Straw poll, has to be more concerned with Perry than with Bachmann.  He wisely stayed out of any dustups in the last debate, and he is probably hoping that Perry and Bachmann attack each other instead of him.  My guess, though, is that Perry will quietly go after Romney, publicly go after Obama and completely ignore Bachmann.  And my guess is that Bachmann will do the same.

Bachmann is rising after the Ames Straw poll, but it is hard to see how high she can go with Rick Perry standing in her way.  Can you say shooting star?