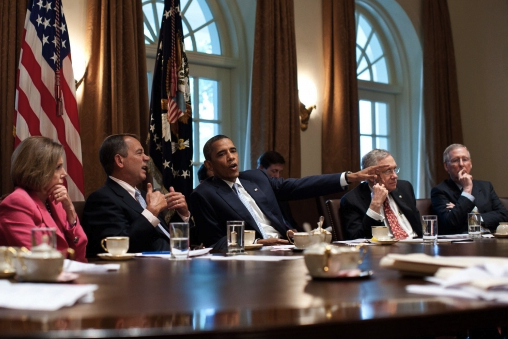 And he worked closely with Speaker John Boehner to pass a sharply limited update to the Patriot Act in the House.

Can this bipartisan cooperation continue into the summer? More specifically, can the White House and Congress come to some agreement on how to keep the government funded when the fiscal year ends in October?

Both Messrs. Boehner and McConnell have pledged regular order when it comes to the routine spending bills that make up the bulk of Congress’s constitutional duties. And the Appropriations committees have been hard at work, holding hearings, marking up bills, and even bringing a few bills to the floor.

Unfortunately, the president has pledged to not cooperate when it comes to this most basic of congressional functions. He believes that the budget agreement passed by Congress doesn’t spend enough money. (Budget resolutions are used to set overall spending levels for appropriations bills that Congress sends to the White House.)

Certainly, that sentiment is shared by Republicans when it comes to defense spending. The GOP budget writers found a way to get around the spending caps when it came to national-security funding.

Policy makers have a choice. They can waste the summer, marking up bills that aren’t going to go anywhere, making their colleagues walk the plank on tough votes, and then wait for the inevitable crisis before they cut the deal. Or, they can cooperate now to find agreement on a bigger budget deal that will smooth the way to regular order for the dozen spending bills that Congress is required to pass.

Conservatives dislike the big omnibus spending bills that Congress usually produces at the end of the year, bills that nobody has time to read and are chock-full of all kinds of goodies that escape notice until well after the final votes are cast.

There’s really only one way to avoid the omnibus. Front-load the negotiations on the budget. Make this a summer of production, not a summer of futility.