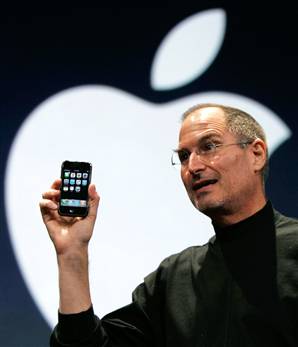 We are all going to hear a lot of stories about Steve Jobs and his impact on our daily lives. How are kids can figure out the iPad before we can. How Grandma is truly hip with her new iPhone. And all of the other really cool family stories. (By the way, I am writing this on an iMac, which I love).

There are plenty of questions raised by the death of Steve Jobs:

- Why can’t we find a cure for pancreatic cancer?

- What happens now to Apple?

- Who is the next truly great American innovator?

All these questions can and will be answered by somebody else.

I want to talk briefly today about what the political class can learn from Steve Jobs.

Jobs' central insight was that he believed that the technology had to be transformed to appeal to the mass market. He didn’t dumb down his technology and he didn’t require the public to somehow learn a bunch of new stuff so that they could use his products.

What he did do was connect cool products with average people in such a way as to elevate the lives of average Americans while still making products that were both innovative and earth-shattering.

And most importantly, he brought the world of technology to the world at large, taking it out of the domain of experts, hobbyists and techno-geeks, and bringing into the consumer world.

That needs to happen to politics.

Somehow, our political debates need to be transformed so they are not dominated by the whims of narrow ideological interests and instead brought to the attention of the vast middle of the country.

Like technology, our political system is complex and opaque, sometimes purposefully so. And unfortunately, when our political class chooses to engage the public, it usually does so by dumbing down the process, through 30-second ads and robo-calls.

What we need is a Steve Jobs figure who can spend some quality time thinking about how to demystify politics without unnecessarily dumbing it down.

Technology must play a role in this transformation of our political culture.

Whether it is through a new iPhone or Android application, a new game console by Xbox, or through Facebook and Twitter, the American people must become better informed about the choices we face as a country, about the legislative process, about the Constitution, and about the many different opinions held by our collective body politic. It wouldn’t hurt if we could all learn a few more things about the world’s economics and our strategic interests internationally.

Jobs was brilliant at bringing technology to the people. Who will be the person who will bring politics back to the people?