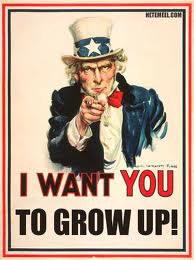 According to the dictionary definition, a grown-up is a “a fully developed person from maturity onward.” I assume that all the Congressional leaders are fully developed people, but the same probably doesn’t apply to all the pundits out there.

Wikihow, an on-line advice site, advises those looking for guidance on how to act like a grown-up to do the following: (1) Stay cool in situations, (2) Do not get into useless arguments with people, (3) Don't insult people for disagreeing with you (4) Be polite under every circumstance, (5) Do not cry when you get yelled at, (6) Always think about how people would interpret your actions, statements, answers, etc. (7) Use appropriate language and tone when you're engaging in a conversation.

This is very helpful advice, especially for those show-horses out there who claim that the world is going to end tomorrow.

The government might shut-down, but as long as we are all grown-ups about it, then we should be okay.

Now, I don’t think it is particularly grown-up to blame somebody else for work you should have done yourself, but it seems to me that is exactly what Congressional Democrats are doing in this debate.

Earlier this year, in Madison, Wisconsin, (14) Democrat Senators decided not to show up for work because they didn’t want to vote on a fiscally tough budget that made it harder for government employee unions to get everything they wanted from the government.

Not showing up for work didn’t seem particularly grown-up to me. And when the unions descended on the State Capitol building, they didn’t act very grown-up either. They weren’t very polite. They engaged in useless arguments. They cried when they didn’t get their way. They didn’t use appropriate language or tone. They insulted their opponents. Not very grown-up.

Yesterday, Paul Ryan introduced what most analysts called a grown-up budget. It addresses the fundamental issues that threaten to destroy the fiscal health of this nation. It makes tough choices. It doesn’t sugarcoat the problems. It is politically courageous.

Ryan’s grown-up budget puts the spotlight on the problems that grown-ups created. It is no coincidence that the generation that is causing most of the problems are the “baby-boomers” because in many ways they act like babies. They would rather cry foul than make sacrifices.

Barack Obama is a baby boomer. I would like to see more grown-up in him and less baby. We need his leadership, not his lectures.

There aren’t enough grown-ups in Washington and it starts at the top.