This originally appeared in The Hill: 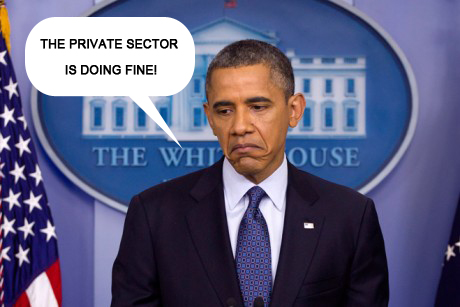 My friend Meg’s mother likes to say, “Everything is fine until it’s not fine.”

That pretty much sums up Barack Obama’s quest for reelection.

The President stepped in it last week when he reiterated his belief that the private sector is “doing fine.”

The Romney campaign jumped on the statement and got plenty of traction framing the President as out-of-touch on what is really happening with our economy.

When unemployment is north of eight percent, obviously things are not fine with the private sector.

It is easy to see why the White House believes everything is fine with the private sector, especially as compared to the public sector.  Jobs have been created in the market place but have been lost in government, especially at the state and local level.    The Obama team sees those statistics and assumes that the real problem with the unemployment numbers comes with severe cuts in government spending.

But there haven’t really been many cuts in government spending, at the state, local or federal level.  The crisis that faces all levels of government comes with spending on those who don’t work, more particularly those who have retired with nice pensions.  When the level of spending continues at the same pace, but less work gets done because less people are actually working, that is when you get angry taxpayers, broken roads, and fewer government workers.

But the private sector is not doing fine.  And the Obama Administration, with its health care mandates, an out-of-control EPA, and the specter of cumbersome Dodd-Frank regulations, seems to have gone out of its way to make life difficult on private companies.  It also doesn’t help that the President has taken piteously little action on major items that drive uncertainty in the market place, things like expiring tax cuts, a pending sequestration, a possible debt ceiling default.   All of that economic uncertainty hangs like a particularly menacing dark cloud atop America’s business sector.

The President’s rhetorical assault on Wall Street, big business, the health care industry, oil and gas companies, and the “rich” serves to underscore his populist bent as an anti-business crusader.  Obama’s anti-business image is well-earned and well-deserved.

Does it matter?  A Gallup poll showed that big business was every bit as unpopular with the Democratic base as big government is with the Republican base.   You could make the case that being a populist President who crusades against the evils of Exxon, PHRMA and JP Morgan is clever politics.

I remain unconvinced.   The voters are looking for solutions.  They want the economy to roar back to life.  They want to see their economic anxiety ease and they want their friends and neighbors to be able to get a job.  I don’t think they want more populist rhetoric from the President.

Mr. Obama should know better.  His chief lieutenant in the Senate, Harry Reid, got in hot water for making the exact same comment last October.   My guess is that for Senator Reid and for President Obama, these were not gaffes.   They honestly believe that the private sector is doing fine.