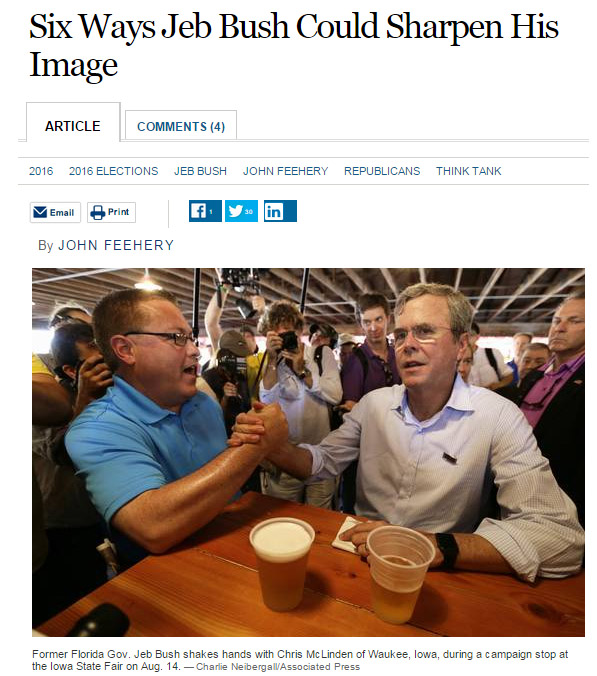 In trying to cut his own path to the Oval Office, Jeb Bush is being excessively open to the media. He is trying to run joyfully and as his own man.
It’s not working.

He might be winning the fundraising race, but ask John Connolly and Phil Gramm how being the best-heeled candidate worked for them.

Succeeding in politics requires more than money. Message and image matter. Donald Trump calls Mr. Bush “low-energy.” Republican political consultant Roger Stone said in the New York Times that Mr. Bush looks “uncomfortable” and “That isn’t going to get him votes.” Polls indicate that Mr. Bush is languishing and not scaring anybody out of the race.

To win the White House, Mr. Bush needs to look more presidential. Here are some suggestions:

* Dress for success: His clothes don’t seem to fit. His shirts are washed out, slightly rumpled, and never sharp. It can be fashionable to roll up shirtsleeves. But the every-man look doesn’t work for Jeb Bush. He should always wear a jacket and usually a tie.
* Ditch the glasses: Sure, Bush 41 would don the eyewear on occasion, but more often he didn’t. There hasn’t been a president who regularly wore glasses since Harry Truman (and he got into the White House initially because his boss died).

* Set the stage. Never make news on the fly, and always be cognizant of your backdrop. Making news surrounded by reporters isn’t presidential and doesn’t convey deeper messages about a campaign. Before talking to the media, take some time to frame the picture behind you.

* Don’t wing sound bites. Mr. Bush needs to know to what he is going to say before he says it. That avoids missteps such as calling Asians “anchor babies” or wondering aloud why we spend so much money on women’s health care. One can be authentic and also not say stupid things.

* Revise your vision. Bush 41 didn’t do the vision thing, but to be Bush 45 this candidate needs to. Make America Great Again is taken. Right to Rise is meaningless to most people. He wants to restore the American dream, and that might be a good vision. Whatever the language, it’s important to get the vision thing down.

* Learn from Donald Trump but don’t worry about him. Mr. Trump has opened the door to a new conversation about politics. It’s more results-orientated, less ideological, and more celebrity-based. Mr. Bush doesn’t have to emulate The Donald, and time spent attacking him is most likely wasted. But it’s possible to communicate with voters in ways that are more visceral, more meaningful, less policy-laden and, really, more fun.