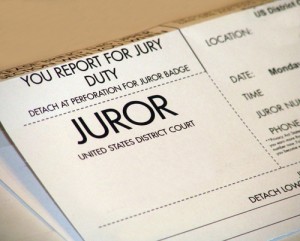 Jury duty is all part of the being a citizen of the United States.  It is a constitutional duty.  It is a right to be tried by a jury which means that you need people to serve on juries.

That is what I am doing today.

When you live in Washington DC, you serve on a lot of juries.  It seems that every three years, I get called to jury service.  D.C.'s trial system is pretty busy, given the relatively small number of people who live here, which means
the relatively few people who are eligible to serve on a jury (DC has a high percentage of folks who are not able to serve on a jury because either their official residence is somewhere else or they have spent some quality time in jail), get called all the time.

It was Athena who first summoned 12 citizens to a jury trial in Greek mythology.  It was also the Greeks who promised jurors a day's wages to sit in judgment of follow citizens.  In DC today, if you get called to serve, you get paid 34 dollars a day.  If you don't get called, you get bucks.  That will pay for a grande latte at Starbucks.

I once served as a juror on a capitol murder case.  Two guys were charged with murdering a fellow gang-banger.  It was a drug deal gone bad.  We got one guy convicted,  but one of the jurors (a white liberal guy), wouldn't let us convict the other.  He didn't feel like the other guy was guilty beyond a reasonable doubt.  Believe me, he was guilty beyond a reasonable doubt.  The other jurors, especially ones who lived in the community where the murder took place, were the ones most certain that the other guy was guilty.  But the White liberal guy didn't feel it.  So, the second murderer
was set free.

I guess that is how it goes sometimes.

Jury service is a pain in the butt.  But it is important that if you are called, you do your duty and you understand the reason you are there.  You are there to make sure the bad guys get put in jail and that the unjustly charged get set free.

The jury system came under attack when O.J. Simpson was set free.  Some African-American jurors were not going to allow O.J. to be convicted, no matter how overwhelming the evidence was.  That was the perception coming from the trial at least.  But there are plenty of instances where white murderers were let go despite their obvious guilt in killing black people. So maybe there was some justice in that.

But, we all have to do our part.  And now I just called to serve.  Damn.