The world is at war.

Who knew it would be at war with a virus?

Like World War II, the United States hoped its splendid isolation would shield it from the conflict.

In the last war, it was the fall of France that finally focused the attention of the American people. 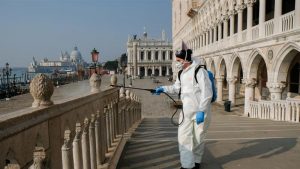 In this war, it was the fall of Italy.

In the last war, the battle of Dunkirk signaled the end of phase one of the war in Europe. Will it be Paris this time around?

If Pearl Harbor more formally introduced America to the realities and ravages of the war, this time around, Covid 19 ravaged Washington state.

America always seems to look East, but first gets attacked from the West.

In World War II, we sent the young to fight and die.  In this war, it is the elderly who are facing the biggest casualties.

In World War II, it was nationalism, fascism, imperialism and communism that led to the butchering of millions of innocents and combatants.  This newest threat is named after a Mexican beer (well, not really, but you know what I mean).

In the last world war, industries were nationalized, sports seasons were suspended, sports heroes and Hollywood legends were sent to the front lines, and common products, like sugar, rubber, gasoline, butter and bread were strictly rationed.

In this war, sports seasons are suspended (too abruptly for my taste), sports heroes and Hollywood legends are afflicted with the virus, and common products are flying off the store shelves, (especially toilet paper).   The government isn’t rationing anything yet, but hey folks, do you really need that whole pallet of hand sanitizer

In the last world war, we drafted young people, trained them to be soldiers and sent them off to die in faraway places.  In this war, we beg young people to stay home and play video game, some of which might emulate actual wars.  And when they refuse to stay home, the government is forced to shut down local pubs and eating establishments.

In the last world war, we mobilized the private sector to help build the tanks, the fighter planes, the guns and the ammunition to defeat the Nazis and the Japanese. 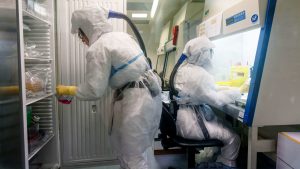 In the last war, the Nazis conquered its neighbors to plunder their resources and create more living space for its people.  The Japanese Empire, starved for oil but also overcome by a nationalist racism, struck out in similar fashion, conquering its neighbors and plundering its resources.

In this war, globalization, no matter how positive it might be for the markets, has facilitated transmission of this virus in a brutal fashion.  It has spread from Wuhan, China to Milan, Italy and then to the rest of the world, via the Silk Road

But it globalization is the culprit, it will also be the hero.

We are in a war.  Like all war, we hope it will be short.  But you never know how long it will take to vanquish this pesky and dangerous virus.