A Wolf In Sheep’s Clothing? 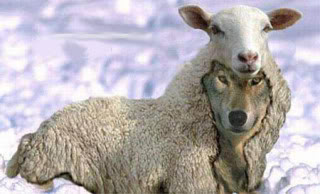 The big question for GOP primary voters:  Who is the authentic conservative?

Is it the guy endorsed by the Senate Conservatives Fund or the incumbent who has a long track record of actually voting conservative?

Is it the trial lawyer who is endorsed by the Club for Growth or the one indispensable Congressman who stands between Obama’s EPA and the farmers, ranchers and miners who live in Idaho?

Milton Wolf tries to portray himself as an authentic conservative but it is hard to believe that he is authentic about anything.

He is most famous for posting X-rays of his patients (he is a radiologist) on his Facebook page and then making jokes about those patients to his friends.

He sounds authentic alright, but not an authentic conservative.

It was revealed late last week that when Wolf the radiologist hadn’t quite passed his Medical boards,  he tried to make money as a purveyor of vitamin supplements.

That’s all well and good, but he did so as an MD, giving the impression that he was a doctor who specialized in nutrition.

Radiologists don’t specialize in nutrition.  They specialize in reading X-rays, most of which aren’t put on Facebook, unless, of course, you are a patient of Milton Wolf.

Wolf’s biggest claim to fame, outside of his controversial career as a radiologist/nutritionist wannabe, is that he is Barack Obama’s cousin.

I am not a conspiracy theorist, so I actually don’t believe this, but it would be a doozy of a conspiracy to believe that the President put his cousin up to run against Pat Roberts, who has been a pretty fierce critic of Mr. Obama and his health care law.

Roberts actually called for the resignation of fellow Kansan Kathleen Sebelius during the heat of the Obamacare fiasco.

That probably didn’t win him many fans in the White House, and maybe they called Cousin Milton to see what he could do.    I doubt it, but you never know.

The Republicans have been doing a pretty good job of nominating good candidates thus far in the cycle, and they have done as much as possible to defend team players who are under assault from morally and politically bankrupt Tea Party groups like the Club for Growth and Senate Conservatives Fund.

Mike Simpson will likely win in Idaho, which has become ground zero in the war between authentic conservatives and fake ones.

It used to be conservative to support real tort reform, to be pro-life and pro-gun.  Simpson is all of those things.  His opponent has been the biggest proponent of the Trial Lawyers in Idaho history (ok, I probably exaggerated that a bit, but you get my point).

It’s weird to have CFG spend so much of its money on a trial lawyer who owns a debt collection agency and who has a reputation for being such a jerk that his neighbors can’t stand him.

The Chamber of Commerce, who had led the fight against the Trial Bar for the last three decades in Washington, is all in for Simpson.   They know that he is an authentic conservative and they know that is his opponent will be a nightmare when it comes to backing legislation that creates frivolous lawsuits.  Once a Trial Lawyer, always a trial lawyer.

Authentic conservatives have a track record.   Fake conservatives are wolves in sheep clothing.  Like Milton Wolf for example.  Or Bryan Smith, the trial lawyer running against Mike Simpson.