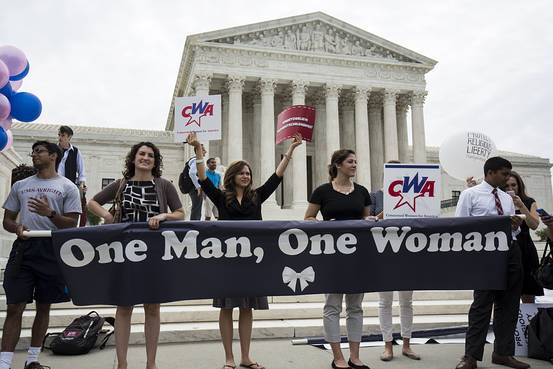 Supporters of marriage between a man and a woman rally in front of the U.S. Supreme Court early on June 26. Reuters

Conservatives may be furious with the Supreme Court, but the court did the Republican Party two big favors this week.

With the justices ending debate over the legality of same-sex marriage and the constitutionality of Obamacare, the GOP won by losing.

Polls show that acceptance of gay marriage has been climbing for the past decade. For Republicans to fall on their swords in a losing battle would have a huge distraction for a divided party.

Republicans can now focus on issues that will unite the party, such as economic growth and national security.

Lawmakers can also take their time figuring out and marketing a replacement for Obamacare, without having to worry about the crisis that would have resulted had insurance subsidies been discontinued in 34 (mostly red) states.

President Barack Obama is not going to sign anything that damages his key legislative achievement, but for Republicans there is light at the end of the tunnel: Mr. Obama is a short-timer, and should a Republican win the White House in 2016, the GOP will get a chance to put in place a better health-care law.

It might not seem like it to the base, but this week’s two biggest Supreme Court decisions are good breaks for the Republican Party.