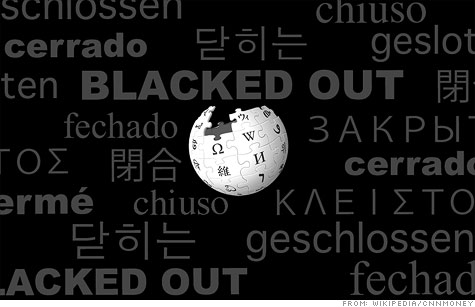 I think it was my grandmother who once said, “Nobody buys the cow, if they can get the milk for free.”

I thought about Grandma in the context of the Wikipedia protest of the SOPA bill.

In full disclosure, one of my clients is a content company that care deeply that they are being forced to give their milk away for free, thanks to the vagaries of the Internet.

I use Wikipedia all of the time.

For a blogger like me, it is a convenient one-stop shop for information. I take phrases from their post about a variety of topics (giving them full credit of course).

One thing I don’t do is pay for any of the stuff they put online. I don’t pay, because I don’t have to. And I don’t have to because they don’t require me to.

Now, if you go to Wikipedia tomorrow (assuming that their little protest is completed by then), you will most likely get, on the top of the page, a couple paragraphs from the Wikipedia people, basically begging for donations.

Some people might give because of those pleas. I am not one of those people, because, well, I am getting the milk for free.

So, it is extraordinarily ironic that Wikipedia is now protesting an online piracy bill that attempts to crack down on rampant theft of intellectual property.

Wikipedia is the perfect poster child for a flawed economic system.

They have discovered that they can’t give away their own stuff for free and then survive financially.

Their partner in the protest, Google, has decided to be more passive in their approach. Instead of cutting off their customers, and giving their competitor Bing a big strategic advantage, the boys at Google are merely putting a black band on their website.

Now, the problem with that approach is obvious. It is good for Google, but really, really bad for content creators. The folks who make movies and music don’t really want their content given away for free, because they know that that you can’t compete with free.

Now movie producers and musicians are among the most artistic human beings on earth. They are idealistic, and they dream big thoughts and they tend to be liberal and all of that good stuff (from the left-wing perspective).

But they are not stupid. And they understand that grandma was right. Nobody will buy the cow if they get the milk for free.

The SOPA/Pro-IP bills might have been poorly drafted and they might need some revisions. I am not necessarily an expert in copyright law nor am I an intellectual property lawyer.

But I do know that the world where one company profits off of the theft of intellectual property in the range of hundreds of billions of dollars has to stop.

SOPA might not be the best solution, but it is a solution. If the Wikipedia guys are so smart, maaybe they can do some research into a better one. But they better do it fast, before they go belly up.