What Exactly Has Obama Been Doing? 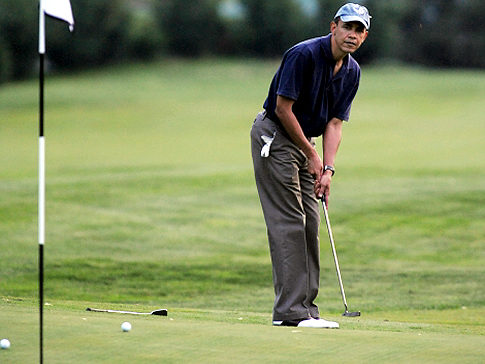 We know President Obama has been busy.

What we don’t know is what he has been busy doing, besides campaigning.

Mr. Obama has done more fundraisers that any other President at this point and time in his tenure.

He has been a pretty avid golfer.  He golfs more than any other President since Eisenhower.

We also know what he hasn’t been doing.

After setting up his so called Jobs Council, filled with corporate CEO’s and smart people who know something about jobs creation, he hasn’t convened a meeting in over 6 months.

You would think with the jobless rate hovering above 8 percent, meeting with the experts on job creation would be a top priority.  Not so much.

Mark Knoller revealed yesterday that the President is going to meet with his Cabinet for the first time this year.

These folks run huge agencies and theoretically, they work for the President.

Having a meeting with your top deputies who run the biggest parts of the federal government is usually one of the jobs of being President.  But not this President.   He is off doing something else, apparently.

The President hasn’t convened many meetings this year with the Congressional leadership.

When George Bush was President, he would convene a bipartisan meeting with the top leaders of Congress on a fairly regular basis.  I know, because I was forced to go with my former boss.  I say forced because, while the Speaker went into the meeting, I was forced to bide my time outside.

Mr. Bush would use those meetings with Congressional leaders to inform them what was happening in the world, especially in Iraq and Afghanistan, listen to their concerns, and find out the latest gossip about what was happening on the Hill.

Obama only meets with Congressional leaders when he is trying to make a point for his campaign.  For this President, governing is an afterthought.

I am reminded of what happened last year, when Mr. Obama invited himself to speak to a joint meeting of Congress.  Obama said he wanted to talk about jobs.

What he really wanted to do was use the Congress as a backdrop for a campaign commercial, which magically appeared a couple of days later.

It should come as no surprise that Mr. Obama just taped a campaign commercial from the West Wing.   Campaign finance gurus like Melanie Sloan sharply criticized the President for using the White House in such a way, although everyone recognizes it as perfectly legal, if more than a bit unseemly.

Might as well use it for the campaign.  That’s pretty much all the President does these days.