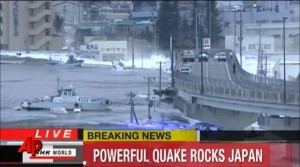 I neglected to turn on the television this morning, and I read the paper oblivious to what was occurring on the other side of the earth.

David Brooks wrote a column in the Times today about America’s addiction to its own healthy ego. As a people, we think we are smarter, better looking and that other people really like us a lot more than is actually the case.

I thought about that column when I turned on the radio and heard about the Tsunami that devastated Japan. For some reason, the virtue of humility came to my mind.

We could all use a good dose of humility, especially as we make assumptions about the future. We don’t know what the future holds, although it certainly makes sense to make plans, it makes more sense to focus on living each day as fully as possible.

Those poor people who were swept away by the tidal wave caused by the 8.9 magnitude earthquake woke up that morning expecting that they would just have a normal day.

Tokyo residents whose whole lives are dependent on electricity now have to face a world without any power (at least for the foreseeable future). Imagine how scary that is.

This tsunami is a reminder that the future cannot be counted on to perform exactly as we expect.

Everybody assumes that the Saudis will be able to control their citizens and continue to give us oil. They assume that up until the point that all Hell breaks loose there, like it did yesterday.

Everybody also assumes that Barack Obama will be re-elected President as the economy roars back. But that assumption is premature. We don’t know what the future holds. We will just have to find out.

Americans shouldn’t assume that we are the best and that we will always be the best. Making assumptions about the future is a very dangerous habit.