Who knew that the one throwing the hammer would be a loudmouth billionaire with a unique hairstyle? 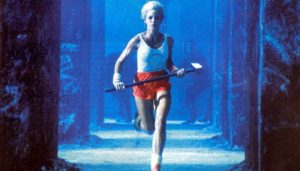 In that ad, a young woman, Anya Major, sprints toward a wall of television monitors, where Big Brother, played by David Graham, intones, “Our unification of thoughts is more powerful a weapon than any fleet or army on earth,” before a sea of grayish, sexually indistinct gray human beings.
Major throws the hammer, smashes the monitors and awakens the assembled rabble.

The commercial, routinely ranked as the greatest in history, announced boldly that the Apple Macintosh would destroy the status quo.

Brad Parscale, President Trump’s campaign manager, should take note. Because no president has done more to smash the status quo than his boss.

Disrupt is the preferred word these days.

Yes, Trump is disruptive, if you want to be gentle about it.

But I don’t think “disruptive” adequately describes the hammer that Trump has taken to the walls that insulate Washington, D.C., from the rest of the country.

Every president, for as long as I can remember, promised to relocate the American embassy from Tel Aviv to Jerusalem. But the diplomats were able to talk each one of them out of keeping that simple campaign promise.

Trump did it, and sure, some Palestinians were unhappy about it, but the world didn’t end, and now, that campaign promise is complete.

Every president since Richard Nixon has promised to get tough on China, especially after we concluded a generous trade agreement with them. But only Trump has gone down the tariff route and now China’s economy is weakening and our economy is strengthening. The experts said it couldn’t be done, but here we are.

Last week, the intelligence agencies all testified before Congress, preaching the status quo. But these same agencies are the ones who said that Iraq would be a slam dunk.

The president is going his own way. Is that particularly wise? I don’t know, but I do know that most Americans were dissatisfied with the status quo, unhappy that we were sending our troops only God knows where and displeased that we were stuck paying for it all.

It is the president’s personal style that is most offensive to the haters out there.

He is a racist, they say. He is a deplorable, just like the rest of them. He divides people. And he is a stooge for Vladimir Putin.

But most analysts will admit that this president has been far tougher on Russia than his predecessor. It’s the Democrats who spend the majority of their time dividing people up into racial classifications, mostly for their political turnout operation.

When it comes to the deplorables, under the Trump economy, wages for all people, from all racial categories, have gone up as unemployment has dropped.

And if Trump is such a racist, why was he the one who signed the criminal justice reform bill that President Obama never even introduced?

The reason the media doesn’t give the president any credit for any of his accomplishments is pretty simple.

They are an integral part of the establishment that Trump is threatening to destroy.

They are the ones that have the most to lose, should the president prove to be successful.

Trump doesn’t play by their rules. He plays by his own rules.

And they find him terrifying.

I remember being absolutely transfixed by the Apple commercial when it first came out 35 years ago.

And now, I type this column on a MacBook Air, which I never could have imagined being possible back then.

Just as Apple challenged the status quo in 1984, so Donald Trump does today.

Shaking things up is never a bad thing.