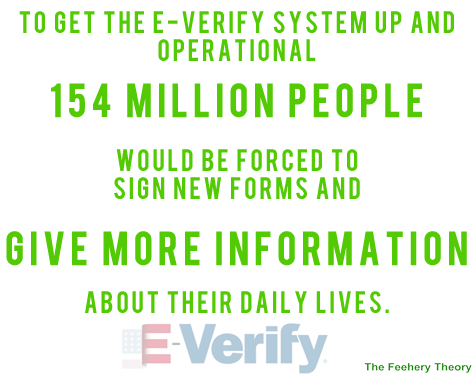 Republicans have rightly condemned both the costs and the intrusiveness of Obamacare.  They believe, and I agree with them, that the new law will increase health premiums, hurt innovation, cost a boatload of money (actually, more than a couple boatloads), drive down quality, and put the power of health care decisions in the hands of government bureaucrats.

Republicans have a healthy skepticism of an overbearing and expensive government, and they have consistently voted to defund it or repeal it on dozens of occasions.

Republicans have been pushing to nationalize an e-verify system that could burden small business, fine working mothers for hiring a nanny, and punish normal citizens for engaging in daily commerce.

And this what Republicans want out of the immigration bill?  More and bigger government?  Really?

According to budget estimates, to get the e-verify system up and operational, it will cost close to 18 billion dollars.  That’s a lot of money that could be spent on other things, like taking care of our veterans, improving our schools, or helping to grease tax reform.

60 million new hires would be required to go through E-Verify system next year if this law were passed,  and 22 million government employees would require re-verification.    In total 154 million people would be forced to sign new forms and give more information about their daily lives.  Approximately 10 million of them would be forced to go skip work to trudge to the local Social Security office, to verify that they are citizens, because of the inevitable errors that come from implementing a new system. This is why people hate the Congress.

Worse, this new law hits potential employers with big fines if they screw up or if they don’t comply.  If you want to hire somebody to help take care of your elderly parents, and you don’t comply with this new law, you could be fined $25,000.   It’s insane.

Government is already too big, too intrusive, too powerful, and too unwieldy.  Why would we make the government even bigger in the context of an immigration reform proposal?

Republicans should tread carefully on e-verify.  More government is not what the American people really want from their government.