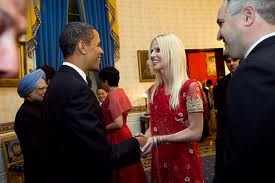 Just as the former producer of the Jerry Springer Show arrives in Washington, the former Real Housewife of Washington D.C. leaves the nation’s capitol to take up with a former rock band star.

Coincidence? I don’t think so.

Somewhere up in the heavens, God is getting a good chuckle.

Congressman-elect Bob Turner's claim to fame before he decided that he wanted to make a splash politically was as a television producer. He most famously produced the show that consistently exhibits for all to see the tawdriest aspects of American society. Springer is especially good at exposing cheaters on national television. I don’t know how they are able to get these folks to appear on their show, but some people just want to be famous, no matter how they get there.

Michaele Salahi is a perfect case in point. She and her husband famously crashed President Obama’s first state dinner, which caused a minor and quite enjoyable little scandal in D.C. That little event brought great shame and more importantly great fame to the Salahi family. The other “Real Housewives” were jealous of her notoriety, and threw her under the bus consistently on the show (which I must admit, I watched on occasion). But Michaele is now getting the last laugh.

Yesterday, it was revealed that her husband had called the police, saying that she was kidnapped. I immediately speculated that Tareq, who seemed more than bit creepy on the show, had killed her. Alas, this story has a happy ending. The blonde bombshell turned up in Nashville, hanging out with former Journey star Neal Schon.

New York’s 9th District is overwhelmingly Democratic and heavily Jewish. Anthony Weiner, who was forced to resign over conduct that would have made a nice episode on the Springer Show, easily won in the district in the last election. But Jewish voters have turned on President Obama, mostly because the President has not showed proper deference to Israel, but also because he hasn’t shown much respect to the capitalist system.

Debbie Wasserman-Schultz, the head of the Democratic National Committee, who knows a thing or two about how Jewish voters think and act, tried to spin this loss by saying it is always going to be tough fight, because it was a special election and because the district has been trending Republican. The last time the Republicans won that district was in the 1920’s.

The American people sent a message to the Congress and the White House that they are sick and tired of our political class acting like a bunch of Jerry Springer Show stars by sending to Washington the former producer of the Jerry Springer Show. If that isn’t a wonderful bit of irony, I don’t know what is.