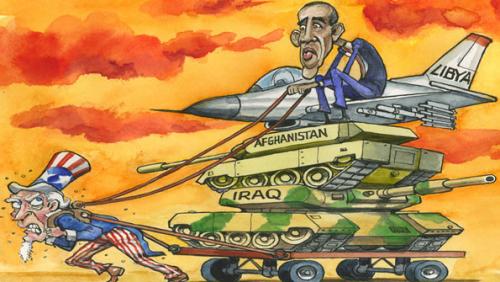 Back then, the American people liked Ike enough to vote him in as president. Eleven years after the Pearl Harbor attacks, the United States had endured a painful Second World War and was in the middle of a bruising conflict in Korea.

They turned to Dwight Eisenhower because he was a war hero, he promised to end the war on the Korean Peninsula and he seemingly provided the American people with a sense that they could get back to a sense of normalcy.

Eleven years after the Sept. 11 attacks, America is once again weary of war. In fact, neither terrorism nor Afghanistan is anywhere near the top of the list of issues that concern the American people.

The Tea Party, a quasi-libertarian conservative political movement, burst onto the scene during the midterm elections, as a response to the rapid expansion of government power and size. This movement is a reaction to the creation of a security state that has been erected to keep the people safe from terrorism.

Getting rid of the security state is no easy task. First, once a government bureaucracy is created, it is awfully hard to eliminate it. Jobs are at stake and politicians aren’t all that interested in killing jobs in a stagnant economy.

Second, the security state provides citizens with greater security, and not only from terrorists.  We now live a world where almost every move you make is tracked by somebody. And that comes in handy when the security state is able to capture a mugger or a rapist on camera.

Even when the security state makes king-size mistakes (think TSA), most Americans would rather endure mind-boggling stupidity from a government agency than face one iota of greater danger from a terrorist getting on a plane.

Libertarians hate the TSA. Most other Americans see it as a necessary inconvenience. And for that reason, the security state lives on.

Obama is trying to portray himself as the national-security candidate. He even made the supremely ironic claim that he has vastly more international experience than either Romney or Paul Ryan. This claim, coming from the guy who had the least experience of any presidential candidate in modern history is, is hilarious. And largely irrelevant. This is not a foreign-policy election.

But some things are very similar. In 1952, the American people wanted to move on to a new era. They were tired of the war economy, tired of the conflict in Korea, tired of Harry Truman.

Sixty years later, the sentiment is the same. Iraq and Afghanistan don’t even register in the minds of most voters. The voters are tired of mindless political conflict, tired of an economy that has underperformed, tired of a government that keeps expanding in size in the name of providing greater security for the citizens.

If Mitt Romney wants to win this election, he has to paint a picture of a brighter future that puts the past behind us and moves the country confidently into the future. President Obama wants to stay the course. Romney needs to let the voters know he is ready to move on.