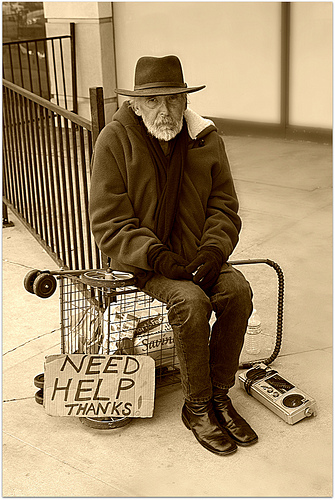 They said that if I voted for John McCain for President in 2008, poverty would increase in America.

They were right. I voted for John McCain, and poverty has increased in America.

Of course, the shocking statistics about poverty in America are not a laughing matter.

Although, as Robert Rector points out at the Heritage Foundation, if you are going to live in poverty, America is a pretty good place to do it.

I was shocked to find out that when the Census Bureau makes its determination about who is poor and who is not, they don’t count the housing assistance, the food assistance and the Earned Income Tax Credit Assistance that most poor people get. If you add in all of those numbers, the poor here are much better off than the poor just about anywhere else in the world.

My friend Paul was riding the bus the other day and he overheard a conversation from one individual who was talking on a cell phone.

This person, who was dressed in disheveled clothes and smelled of booze, was bragging about how he made 500 bucks under the table (as he put it), spending a couple of days picketing a local business on behalf of a building trades union. He wasn’t a member of the union, of course, but he took the money and he whooped and he hollered on behalf of the Big Labor, and then he went back to his air-conditioned apartment (which was provided by the government), drank an ice-cold beer and watched basic cable television (which is probably also paid for by the government.

Twenty years ago, if you had a cell phone, cable television, air conditioning and made 500 tax-free bucks for a couple days work, you would have been called comfortably middle class. Now, well, you could definitely being living in poverty.

Undoubtedly, people are hurting in this country, and there is an element of stress and anxiety that has become a daily part of life for many Americans. But we have come a long way in America, and the daily anxiety that the poor feel these days (except for a very small minority of homeless Americans) can in no way compare to the daily anxiety faced by the poor of a generation ago.

That being said, the Democrats have done their best to keep the poor in their place. They raised the minimum wage, making it harder for the poor to get that first job. They supported the Big City education unions, who have successfully kept city schools a disaster. They resisted welfare reform and their anti-poverty programs also seemed to put money in the hands of local politicians and not in the hands of those who could create real jobs.

Poverty is a hard nut to crack. In a free and capitalist society, there will always be gaps between the rich and the poor and sometimes those gaps can be quite wide. But that is not always a bad thing, as long as the poor keep moving forward, as long as their lot in life improves materially. It was Churchill who said that the inherent vice of capitalism is an unequal sharing of blessings. And of course that has been the case with American society.

But poverty is not just about material things. It also has a spiritual component. And when the poor lose hope, lose self-respect and lose faith in society and in themselves, that is when trouble comes.

The trouble for Obama is that many in the middle class now feel poorer than ever. And they don’t believe that the President has any real plans to ease their anxiety. And of course, he doesn’t. Mr. Obama doesn’t implicitly believe in the capitalist system. He doesn’t trust the marketplace. So, for him, he can’t help but inject class war into every so-called stimulus idea.

The President doesn’t have a real plan that will help the poor or the middle class. He just wants to raise taxes and increase government spending.

I voted for McCain for President and the poor got poorer. They warned me that would happen.