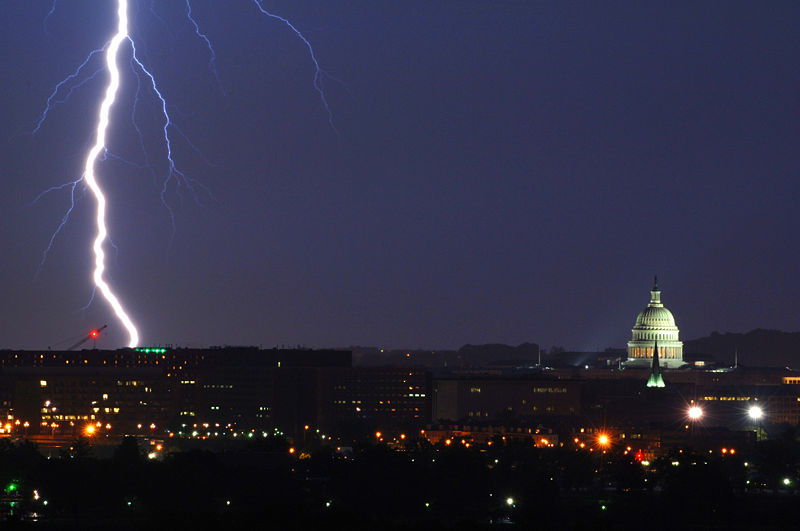 In 1997, Sebastian Junger wrote a book called “The Perfect Storm”, detailing the demise of the Andrea Gail, a fisher trawler that got caught up in a unique weather event in 1991.

The Perfect Storm is an apt metaphor for what befalls Congress at the end of this year.   Known at the time as the Halloween Storm, the weather event of 1991 combined elements of the classic nor’easter with
Hurricane Grace, transforming itself into a large and powerful cyclone.

The Perfect Storm confounded expectations and claimed the lives of experienced fishermen.  These fishermen were pursuing their economic self-interests, losing sight of the bigger realities that were obvious to all who had the sense to open their eyes.

Congress is purposefully entering a perfect storm created by its own previous legislative action (and now inaction).  Some call this a fiscal cliff, although that would imply a sort of easy finality that is simply not an accurate prediction of what could happen should the Congress decide not to complete its work at the end of this year.

This Congress has an unusually high number of unfinished tasks left on its agenda, all of which it is postponing for the post-election months of November and December.   These items can be divided into the following categories:  bills that it is statutorily obligated to complete (includes increasing the debt ceiling and every single appropriations bill), fiscally important items to resolve (the defense sequester and the expiration of Bush-era tax cuts), and industry-specific must complete items (tax extenders).

Lame duck sessions usually adopt a Thomas Hobbes approach to life.  In other words, they are usually nasty, brutish and short.   Members of Congress are spending their time in lame ducks planning (or plotting) their positions in the next Congress, unless they are trying to find a job in the private sector, after losing their elections.  While Washington in December can be beautiful, there is nothing beautiful about a lame duck Congress getting its overdue work finally completed.

As a result, the natural assumption is that the Congress will only do the minimum amount it can do, kicking all things discretionary down the road.

None of these items approaches the importance or economic significance of the legislation that Congress must decide on before the end of this year.  And it is hard to predict how all of this will turn out.

Certain questions must be asked but can’t be answered at the moment, chief among them who will win the Presidential election and which party will control the Senate (my assumption is that the House stays Republican).  If Romney wins the Presidential election, it is easy to imagine him wanting the Congress to postpone any serious action on taxes and spending to give him the opportunity to solve those problems himself.  Should Obama win reelection, but lose the Senate (an unlikely scenario), he could decide to cut the best deal he can with Harry Reid as leader, before spending four frustrating years dealing with a Republican dominated Congress himself.

But interest groups can’t afford to wait to see who wins or who loses, so they are mobilizing now.   The Defense Industry has launched an intense lobbying campaign, bringing in former Vice President Dick Cheney to warn Congressional Republicans about the perils of deep defense cuts.   Associations representing the Hospital industry are readying a lobbying blitz to complain about the 2% cuts they face in sequestration and make certain that should the defense industry succeed, additional cuts don’t hit them.

On the tax side, corporations are launching campaigns to educate members of Congress about the importance to the dividend tax cut, which is set to expire at the end of the year.  Several companies are working hard to get tax extenders extended once again.

Agricultural groups are storming the hill in the hopes of convincing the Congress to pass a Farm programs reauthorization.  The Farm bill is set to pass the Agriculture Committee this week on a bipartisan basis, but it is unclear if the Congress has the time or the inclination to get the reauthorization done before the lame duck.

Senate Democratic Leader Harry Reid, for example, announced that he wasn’t going to do any more Appropriations bills on the Senate floor.  This gives him maximum leverage to negotiate all parts of the 13 bills in an omnibus.  He has also drawn a line in the sand on the issue of the Bush tax cuts, saying that he will willingly let all of these tax cuts expire if the Republicans refuse to cave on so-called tax cuts for the rich.

Speaker John Boehner and House Appropriations Chairman Hal Rogers went the other way on the spending bills, moving briskly to get the Committee to at least consider all twelve bills at the subcommittee level, giving the Committee a good marker from which to conclude the final deals.  On taxes, Republicans are content to play chicken with Reid, saying boldly that they won’t cave.

House and Senate Republicans are energized on the perils of the defense sequester.  They are desperately seeking to find the leverage they need to postpone or eliminate the cuts they perceive to be devastating to national and economic security.  They already voted through a plan to cut spending elsewhere through the reconciliation process to ease the burden on military spending.  That plan, predictably, went nowhere in the Senate.  Senator Kelly Ayotte has taken up the cause in the Upper Body, organizing industry allies to work over the body’s majority party.  In this effort, she has an unlikely ally in Defense Secretary Leon Panetta, who has weighed in that such cuts would damage our national security.  So far, the Senate Majority Leader remains unmovable.   In fact, he said earlier this week that he has no intention of backing away from the defense sequester.

In an effort to impose his own form of leverage, Senator Jim DeMint recently said that nothing should happen in a lame duck.  He pushed instead for the House to pass a continuing resolution for all of 2013, taken away any need for the House and Senate to meet until the new Congress is sworn in.  It is unclear what this strategy would do for the Bush tax cuts.

There is a rather perverse reason why allowing all the Bush tax cuts to expire at the end of the year could end up helping Republicans (if not the business community) achieve one of their stated policy goals.   Many Republicans have signed Grover Norquist’s tax pledge, meaning that they have signed an oath stating that they will never vote to raise taxes.  Should the Bush tax cuts expire naturally, increasing the revenue baseline by 1.3 trillion dollars over ten years, tax reform that would reduce that revenue by, say, a trillion would be seen as a tax increase this year, but a tax cut next year.  In other words, allowing the Bush tax cuts this year makes it far easier for Republicans to enact tax reform next year.

The view from the financial markets right now veers between studied concern and unfocused insouciance.  Most financial analysts assume that Congress will work something out, and that far more pressing things (like the European debt crisis and a potential war between Israel and Iran) are their chief focus.  And in a bigger sense, gridlock is not the worst case scenario, especially if your chief concern is out of control debt.   After all, gridlock will automatically raise taxes by more than a trillion dollars and cuts spending, through the sequester, by just about the same number.   However, for industries that are specifically targeted by inertia (defense, hospitals, corporations with dividends, biotech, wind energy, etc), gridlock could be devastating.

At the end of the day, three leaders will make the most of the decisions in the lame duck, Speaker John Boehner, Senate Majority Leader Harry Reid, and President Obama.  None of them can make their decisions in a vacuum, of course.  Boehner has to consult with his top lieutenant Eric Cantor, Reid can’t do anything without consulting with his counterpart Mitch McConnell, and Obama, depending on whether he wins reelection or not, has a vast bureaucracy that he must answer to.

These leaders are right now accumulating their assets, finding their leverage points, mobilizing their allies, and test-marketing their messages, as they campaign to keep their jobs.   They are engaged in an intricate Kabuki dance as they alternate between drawing lines in the sand and lambasting their rivals for drawing their own lines in the sand.

While it is too early to predict what exactly will happen in the lame duck, it is safe to assume that the Congress won’t get everything done that it needs to, that the Congress will do only that which it finds it must do, and that it will make its decisions on what it needs to do only after discovering that it can’t do what it wants to do. The process always takes longer than it has to take and it always happens only when a non-breakable deadline has already been roundly ignored.  But that is how Congress operates, even in the middle of a perfect storm.