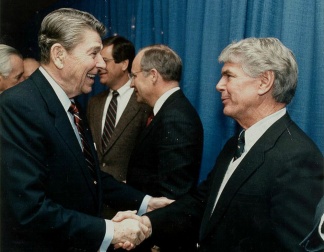 When I first started on Capitol Hill (23 years ago…man, I am getting old), I was not terribly sophisticated in the world of politics.  For example, I couldn’t quite come to grips that one of the most powerful men in the House of Representatives had the same last name as a famous comedian who spent every Labor Day raising money for disabled kids.

Jerry Lewis, at that time, was Chairman of the House Republican Conference and, along with Mickey Edwards and Tom DeLay, a rival of new House Minority Whip Newt Gingrich.

Even back then, Lewis was old-school.  A former insurance salesman, Lewis understood politics from the street-level.  He wasn’t a particularly brilliant theoretician, but he was a great practical politician who got into the game to help his constituents.

Jerry Lewis first brought Frank Luntz to the attention of the Republican Party, inviting him to a Congressional Institute retreat held at the Princeton University campus.  The winds of change were whipping around the GOP caucus at the time, as the party became more fixated on taking over the House of Representatives.

Lewis helped harness those winds during his tenure as Chairman, but then a hurricane (known as the 1992 election), blew in and blew him out of his leadership position (along with President George H.W. Bush).  Lewis lost a bitter race to eventual Majority Leader Dick Armey for the Conference Chair position.

I was rooting for Lewis, because he was an ally of my boss, the House Minority Leader Bob Michel, and because I had a lot of very good friends who worked for him, including Jeff Shockey and Bob Okun.  But I learned something from that race.  You have to be on the right side of history.  You can’t be for the status quo when the voters (who were in that election the members of the House Republican conference), want dramatic change.  Armey represented change and Lewis didn’t.   Armey won while Lewis lost.

What I admired about Jerry Lewis was that he didn’t pout when he lost his leadership slot.  Like John Boehner, who faced a similar challenge 6 years later, Lewis poured his energy into his Committee work, eventually becoming the leader of the Appropriations Committee for 6 years (two years as Chairman, and four years as the ranking member).

Lewis became an expert in defense spending and a partner with the House leadership in cutting excess spending.  And he was a good soldier, a solid member, and an able dean of the California delegation.

Lewis is the latest of California’s old bulls to exit.  Earlier this week, Elton Gallegly and Wally Herger announced that they were retiring, and there is rampant speculation that long-time Rules Committee Chairman David Dreier may also pack it up.

These guys are all retiring because of the California redistricting process that has already radically reshaped its Congressional delegation.  America’s most populous state is a complete mess financially, as many of its small towns are nearing bankruptcy.  You can make the case that the California delegation needs new blood, but it would be a mistake to think that the state can do without the money that Mr. Lewis was able to bring back for his district.

Lewis has paid his dues and has been a good soldier.  He deserves some time off and a hearty round of applause for a job well done.