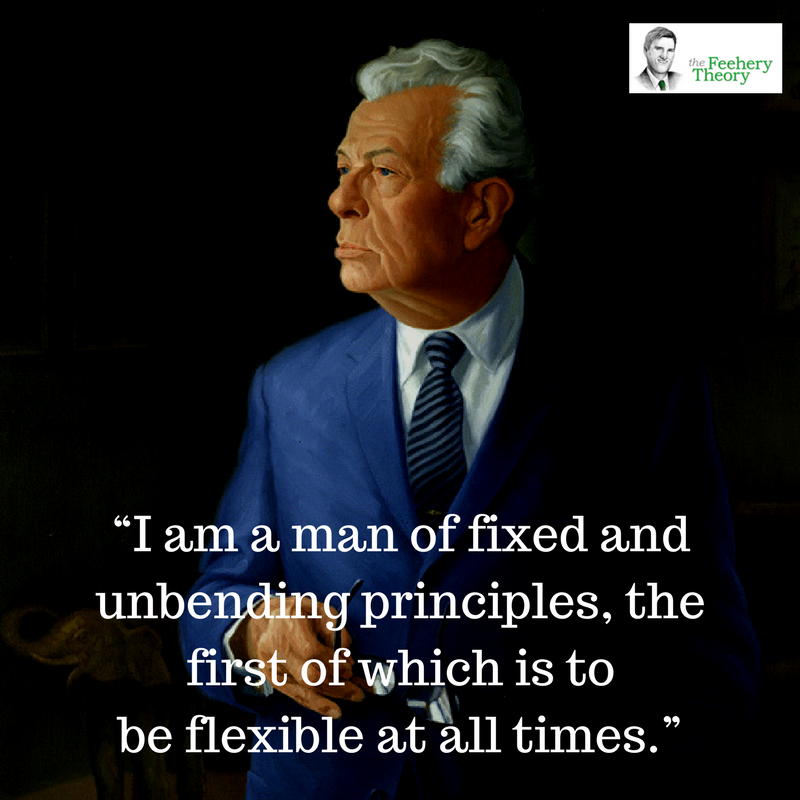 “If you are lucky enough to have lived in Paris as a young man, then wherever you go for the rest of your life it stays with you, for Paris is a moveable feast.”

I doubt Hemingway would have supported Donald Trump in this Presidential election.  He fought for the Communists in the Spanish Civil War, was generally regarded as a leftist, and he had little regard for the wealthy.

But I was thinking about Hemingway’s quote in regards to the President’s approach to Congress.

Instead of a moveable feast, the President is trying an approach I would call the moveable majority.

Trump reminds me of the famous Everett Dirksen assertion: “I am a man of fixed and unbending principles, the first of which is to be flexible at all times.”

The hard right’s amendment to the Dirksen quote would be, “I am a man fixed and unbending principles, the first of which is to be inflexible at all times.”

They wear their inflexibility on their sleeves and broadcast it to the world proudly.

The ability to compromise is the coin of the realm in a democracy.  You fail to create a win/win situation, where both sides can claim a modicum of victory, and you get gridlock.

We seek to compromise every day.  When you drive in Washington DC, you have to learn to compromise just to make it to work on time.  When merging, one car has to give in to another car to keep the traffic flowing.  When two jerks refuse to give in, that’s when you have an accident, and presto, you are late for work.

The American people are tired of the legislative car crashes.

They want a fully functional government that works on their behalf.

They don’t want a broken immigration system, where 11 million undocumented, illegal aliens are exploited by employers, living on the fringes of society, committing crimes and driving down ways.

They don’t want a tax code where some corporations pay nothing while other corporations pay the highest rate in the world, where some rich people get off scot-free while small business owners are donating half their salaries to the government.  They suspect that a tax system that is so complicated that most accountants don’t understand it is probably not working fairly for them.

Conservatives are not nihilists.  They want a fully functioning government that does a lot fewer things but does those things well. They don’t want their tax dollars wasted in government shut-downs.  They don’t want a legislative branch that can’t effectively oversee our mandatory spending programs.

Donald Trump is not a natural politician.  He has been criticized by the left and the right for not understanding the nature of his job and for saying things that are offensive to some people.

Trump may not a be natural politician, but he is smart enough to see how to best break through the gridlock.

I, myself, wouldn’t negotiate with Nancy Pelosi, because she is not really a negotiator and she doesn’t have a vested interest in making the Congress work. Instead, I would have had a secret meeting with Steny Hoyer and figured out ways to work with him.

The President has to find a moveable majority.  On immigration, he will have to build a majority with Democrats and Republicans.  On appropriations, he will have to do the same thing, which might make funding for the wall more difficult.  On taxes, he might get a bill through with only Republicans in the House and may be a few red state Democrats in the Senate (along with bulk of the Republicans).  He might need to do a stand-alone authorization bill on the Wall with only Republican votes.  On the budget, he will only get Republicans, because that is the nature of budget resolutions.

Good for the President for taking steps to break the gridlock.  Let’s hope he is successful.