The DNC is the Minorities’ Party 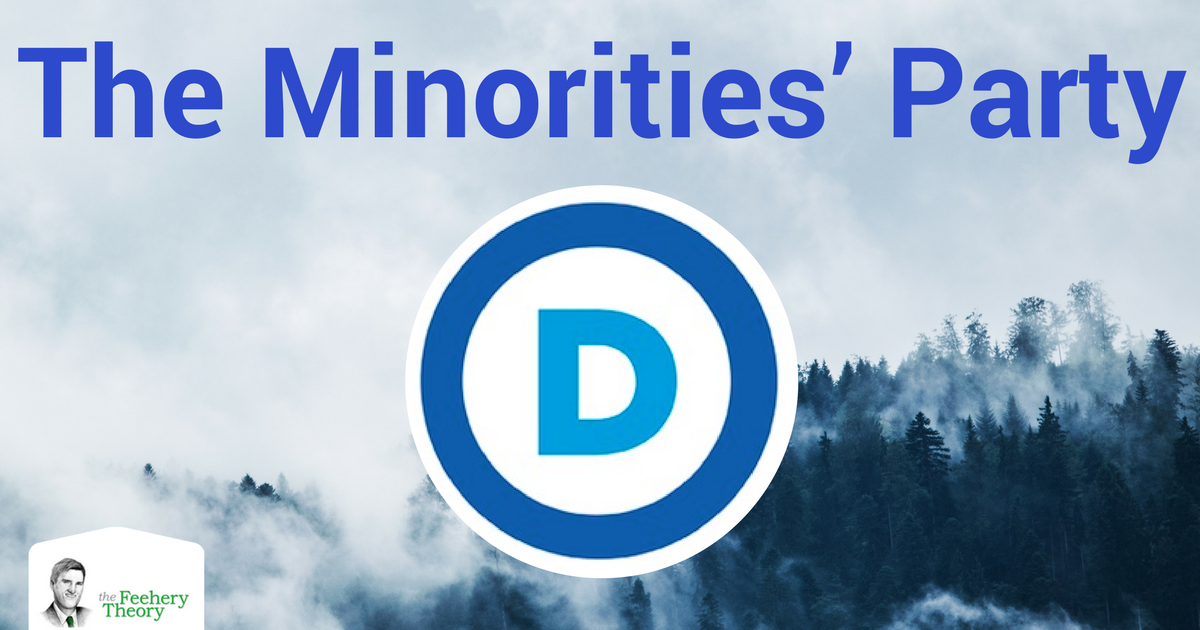 During the early 2000’s, the Republican Party listened too closely to its component parts, which led to its collapse in 2006.  It blundered into the Iraq War at the request of the neo-conservatives.  In a bow to the libertarians, it appointed free-market absolutists to lead the SEC, as it pushed for free-trade agreements that ignored the impact on working class voters.  In order to energize so-called values voters, it pushed to vilify gay people by attempting to ban gay marriage.  To please its big donors, it refused to raise taxes on the very wealthy.

And, of course, by 2007, it became clear that several things had gone wrong.  The economy was failing.  The Iraq War was a disaster.  And Republicans were losing, convincingly, the culture wars.

The same dynamic manifested itself in the 2016 elections, which helped to sink Hillary Clinton.  And in the aftermath of that disastrous election, Democrats are doubling down on their failed strategy of catering to the extremes rather than recalibrating for the national interest.

More so than the Republicans, the Democrats are a coalition of minority groups who get their group identity from that minority status.  It includes African-Americans, Hispanics, gays, and women who identify themselves primarily as feminists.

Before, during, and after the campaign, the Democrats were forced to first address the issues of those minority groups before it could turn to the biggest issue of concern of the voters, which was the economy.

They were forced to adopt the most radical positions of the Black Lives Matter movement, which posited that most police officers were racist.  Hillary Clinton said basically that during the campaign, which alienated white ethnics and those who see the importance of law and order and are concerned about crime in their neighborhoods.

Hillary also called for open borders and amnesty of all undocumented aliens in a nod to Hispanics in her coalition.  But that position caused tension with some in the rest of her coalition who worry about the economic impact of illegal immigration, especially on wages.

The Democrats were forced to move dramatically to the left on cultural issues, especially when it came to rights of transgendered people to use whatever bathroom they wanted.  The Obama Administration basically declared war on the Catholic church as it implemented Obamacare, because of the Church’s long held positions on life issues.

Feminists made the election not about Hillary’s qualification, but about her gender and about her positon on abortion.  It wasn’t what she could do to keep America safe or to revive the economy or how she would shake up the status quo.  She was woman and that was enough for her most active female supporters.

Clinton’s campaign theme “Stronger Together” was a plaintive cry to her coalition to submerge their own interests to work for the greater good, but it was unconvincing, especially to those white ethnic voters of both genders who powered Donald Trump to the White House.

The race for DNC chair seems to indicate that the Democrats have learned nothing from the last election.  The leading candidate to replace interim Chairman Donna Brazile is Keith Ellison, a former member of the Nation of Islam who has a history of making anti-Semitic statements.  Tom Perez, a progressive who exhibited a deep distrust of the business community when he was Labor Secretary and promulgated many of the regulations that Donald Trump is trying to repeal, is seen as the moderate in the race.  There is not one white, straight man in the race, but one candidate, Boynton Brown, said that it was her “job to shut white people down”, when they attempt to speak about racial issues.

Shutting white people down is not a particularly effective strategy for a political party as it seeks its way out of the wilderness.  I imagine that the Democrats will be wandering there for a while.