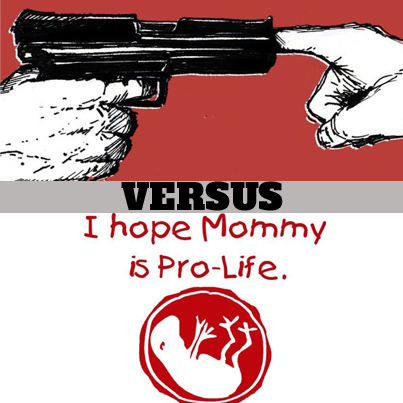 It's a powerful lobby group that has a major political party in a vise grip which has only grown tighter as the years go by. It has opposed every common-sense regulation that has come down the pike since the mid-1970s, even though those same restrictions are favored by a vast majority of Americans. While it fiercely advocates for its policy stands, many critics believe it has blood on its hands, as the right which it defends claims thousands of innocent lives a day.  Oh, and its initials begin with an "N."

The organization to which I refer of course is NARAL Pro-Choice America, the abortion industry's leading lobby group.

Of course, you'll never find the old media outlets referring to NARAL in quite the same way as the media tend to deal with another single-issue rights-focused group, the National Rifle Association. But why exactly is that?

The contrast came to my mind recently in the wake of Aurora, Colo., with liberal activists clamoring for, and a generally liberal media establishment parroting, the talking points of the gun-control lobby. No right in the Constitution is absolute, we are reminded, and besides, there are legitimate public safety concerns which dictate reasonable policy changes, gun control advocates argue. Surely a little additional inconvenience to law-abiding civilians is worth saving lives, they say, and the traditional media largely nod their heads in agreement.

So why doesn't the media treat the abortion debate in the same manner?

The same line of reasoning can be legitimately voiced by pro-lifers who are calling for abortion control: for common-sense regulations that make abortions rarer and safer. And indeed, pro-life advocates have pushed successfully in various states for laws that more tightly regulate abortion clinics, trying to make them more in line with the common-sense regulations for outpatient surgical centers, which, essentially is what an abortion clinic is, discarded unborn human beings aside.

But wait a minute, we all know that pro-life activists have as the end-game a ban on abortion. Doesn't their underlying philosophy militate against such a comparison? Perhaps it would if it were true that the fiercest of gun control advocates never met a gun restriction they didn't like, because ultimately their perfect world would be one without civilian ownership of firearms.

No, the fundamental difference is that the old media's narrative formation is heavily influenced by the narratives of the liberal interest groups with which it is sympathetic.

A sharp clash of ideas and a healthy skepticism of political narratives would make for good journalism and good business for the old media. Preaching to the choir is fun, but it only reaches a tiny portion of an incredibly diverse market.

Traditional media would do well to hire more conservative and libertarian journalists and editors who can question traditional boilerplate liberal narratives and sniff out stories that break traditional left-of-center molds. Traditional media would also do well to hire intellectually honest liberal reporters and editors who can fiercely play devil's advocate and leave no trite narrative left unchallenged, the type of journalists who will throw a discredited, factually-deficient meme under the bus rather than breathe life into it for the service of advancing an ideology.

To do so would be a true public service, and, I would argue for the outlets that attempt it, better for the bottom line.

New media aren't going anyway and neither is the iconoclasm and fierce independence of those who practice it. That said, new media outlets are going to find trouble appealing to the mass audiences of the legacy media. Despite the promise of diversity in a digital age, the mainstream media will never completely disappear, but it will evolve and it must adapt.

To the extent that old media journalists wish to command respect and a healthy market share, they'll seek to cater not to narrow slivers of ideological compatriots but to a broad swath of Americans across the political spectrum. To do that, no narrative or worldview must go unchallenged and sacred.