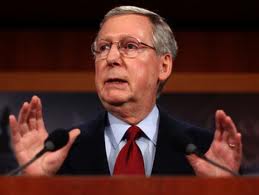 So what exactly is Mitch McConnell up to?

McConnell offered a solution to the debt limit imbroglio that has been described as cynical, stupid, worthless, traitorous and worse.

It may be all of those things. But it is also brilliant.

Mitch McConnell is perhaps the most gifted political infighter in Washington today.

He lets off little bombs every once in a while to let the Tea Party understand that he is really with them in his opinions of Mr. Obama, but most of the time, he protects the prerogatives of the Senate as he promotes the political aspirations of his compatriots.

McConnell’s plan to increase the debt limit puts the entire burden on the President.

He is essentially saying to Mr. Obama: If you want to put more money on the credit card, you can do it, but you also have to shoulder all of the blame.

McConnell’s plan gives Republicans (and more than a few Democrats) the ability to vote against increasing the limit, while at the same time avoiding the economic catastrophe that will come if we don’t increase the limit.

Is McConnell punting rather than confronting our debt problems? Yes, of course he is. If Republicans take this approach, aren’t they losing an opportunity to force the President to accept major spending reductions? Yes, they are.

But that is exactly the message McConnell wants to send to his Tea Party brethren.

The Tea Party Republicans need to understand that they have to get their collective heads out of the clouds and start negotiating on something real if they want to really cut spending.

The Balanced Budget Amendment is going nowhere. Sure, the Senate will have a vote and sure all of the vulnerable Democrats who need a good vote to prove their conservative bone fides will now have a chance to prove to their constituents that they are born-again conservatives, but the BBA will still not get the requisite votes.

On the House side, the only reason John Boehner is negotiating with Obama at all is because he needs Democratic votes to pass anything on the debt limit. A colleague asked me why Boehner wouldn’t just simply take the 2 trillion dollars in cuts negotiated by Joe Biden and Eric Cantor, package that up and send it to the Senate. Makes a lot of sense except for one overwhelming fact: It wouldn’t pass. At least 50 Republicans have already said that they won’t vote on any debt limit unless it includes a Balanced Budget Constitution Amendment. But such an amendment probably won’t pass the House and it certainly won’t pass the Senate.

McConnell’s plan serves notice to the House GOP, especially the ones who plan on voting no on everything, that the train might leave the station without them. They better get on board.

The McConnell gambit will probably not become the law of the land, but it certainly has helped prod the debate forward.