The Hammurabi Approach to the PTC 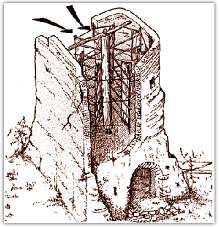 That Hammurabi built the first windmills to help power the irrigation of the Babylonian gardens would be entirely appropriate, because it was Hammurabi who was one of the first great legal reformers.

His bust sits above the United States House of Representatives, and his legal code still inspires lawmakers to this day.

Wind power has been used since antiquity to create energy to do things for people.  It helped to irrigate gardens, mill grains and later to create electricity.  At the turn of the 19th century, there were 200,000 windmills spread throughout Europe, although those numbers started to decline with the rise of the internal combustion engine.

Before the electrical grid spread across America in the middle of the twentieth century, the only electricity most farmers had came from either windmills or waterwheels.

Windmills (or wind turbines, as they are now called) have been making a comeback as of late.  The Federal government has helped this process along a bit by encouraging investment in this cleanest (and oldest) of energy resources.   For several years now, the tax code has given companies big and small a production tax credit that has allowed utilities to get a small tax break for every bit of energy produced by wind.  This costs the Feds little, as the money eventually makes its way back to the Treasury (according to a CBO analysis).

But the PTC (as it is known in the business) has helped America regain its edge in this ever-evolving technology.

According to a new poll put out by National Journal, this tax credit is very popular with the voters, who like the concept of clean energy, especially if it is cheap and clean.  64% of likely voters think that the Congress should extend the PTC tax credit, which is due to expire at the end of the year.

The problem for the Congress and for fans of wind energy is that if they don’t extend the PTC soon, American jobs in the industry will go away.   That is because the PTC makes it economically attractive for companies to invest in wind energy, but these companies have to make their decisions based on current policy.  And if the current policy says that the tax credit will expire at the end of the year, the incentive to invest dries up.

Now some purists will say that this just shows that wind energy is not economical in the long run, that this industry should be able to stand on its own two feet.  But the fact of the matter is that wind energy production has become way more cost-efficient over the last decade and will become cheaper in the future through technological advances should the PTC be renewed quickly.

There is bipartisan support for wind energy.  The President has put it on his Congressional to-do list, and conservatives like Sam Brownback, Steve King, Chuck Grassley and Terry Branstad are huge supporters.  King’s support actually is helping him in his general election fight, because in Iowa, alternative energy is not only a job creator, it is also a major source of electricity production.

The wind energy industry has concluded that if the PTC is not extended quickly, 75,000 jobs could be lost.  Most of those jobs are in Republican districts, so should House Republicans not act, they will be hurting their own constituents.

Hammurabi was all about legal reform, and there is no doubt that there are too many little tax breaks that muck up today’s tax code.  But Hammurabi was also about investing in wind energy, at least according to legend.  Perhaps channeling their inner Babylonian spirit, the industry has put forward some ideas on how to phase the teax credit out in a way that will keep the industry healthy without taking the wind out of the sails of innovation.

What was once old is new again.