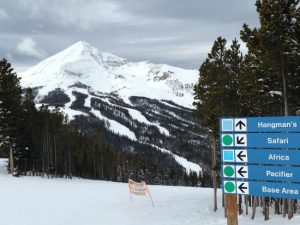 I learned later that the hill I crashed on was called Hangman’s Trail.

I was hoping to go on the Safari trail, which was an easy green, according to my 7-year old daughter, who has become an accomplished and fearless skier over the last three years.

But Kristi, the very nice lady who stuck with me until the Ski Patrol showed up to take me to the first aid station, let me know that I had somehow made it on the run that they use for Big Sky’s ski races.

I now know that I am not cut out for the Olympic skiing team.  But in my defense, I think I got myself up to about 70 miles per hour, up until that point that I lost control, and bounded about 100 yards down the slope, with my skis and my polls scattered about the mountain.

They call that in the skiing parlance a yard sale.

I learned that from my son and his friends, who brag about their yard sales after their weekly school ski trips.

Yard sales for 13-year-olds are one thing.  For aging (but not balding) beginning skiers like me, yard sales are quite another.

I was lucky because I didn’t break anything, although I do have some deeply bruised ribs and an even deeper bruised ego.

I am new to skiing.  My wife and I have taken it up because our kids love to ski, and we didn’t necessarily want to be on the sidelines while they had all the adventure.

My 13-year old is skiing double-black diamonds and my daughter loves to ski the blues, so we don’t necessarily ski as a family.  But it is a fun family adventure, nonetheless.

Some of my friends and family think we are crazy to get out there and learn something new at our advanced age.   But I think it is important to show our kids that life-long learning is something that you have to do throughout your life.

We don’t necessarily have the money.  Skiing is an expensive sport and our vacations to ski spots leave a mark on our yearly budget.  But we have fun doing it, and it’s a better investment than, say, Redskins tickets.

Skiing is one of those new things that I learned how to do over the last decade.

It became fashionable on Twitter to list all of your professional accomplishments over the last decade, and I snarkily tweeted that I would keep my list to myself.

Upon reviewing my last ten years, my biggest accomplishments that come top to mind had something to do with my kids.

We won the Jelleff League basketball championship.  I was the coach and my son was one of the star players.

I wrote a children’s book about my daughter, The Reluctant Ballerina.

I started the first annual Concerned Fathers of the St Peter’s Fish Fry, which raised money for St. Peter’s School.  Of course, I had a lot of help, especially from Scott Jancy and Topher Cushman.  But that was a real solid accomplishment.

My wife and I have learned how to become better parents and our kids seem to happy and healthy, although my 13-year old talks mostly in grunts and eye-rolls.

We have become active in our school community and those activities bring me the most personal satisfaction.

Professionally, I am proud of other accomplishments.

EFB Advocacy hasn’t made me millions of dollars yet, but I like my clients and I like my partners, John Easton and Adam Belmar.  It’s not easy starting your own business and we have had our ups and downs.  But no matter what happens, we have learned a lot about how to do this type of thing. 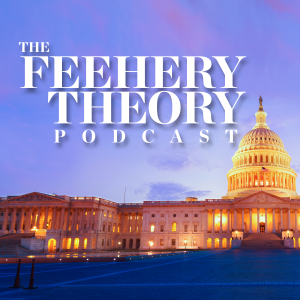 Our podcast, “The Feehery Theory brought to you by EFB Advocacy, EFB means Excellent for Business”, is a constant source of innovation for us, especially our in-house producer,  Adam Belmar.

We have tons of fun doing it and I think we get good guests and have interesting discussions.

This has been a wild decade.

Ten years ago, I wrote about how Republicans were poised to take back the House after 2 years of the Obama Administration.  Nobody believed that could happen at the time, but I remember talking to Rahm Emanuel, who was then the White House Chief of Staff, at a party three months before the election, telling him that Republicans were going to win at least 60 seats.  He nodded his head in agreement.

And yet still most of Washington was surprised by the result.

Rahm would later show up at a surprise 50th birthday party a few years later, orchestrated by my wife at Butch McGuires, in my hometown of Chicago.  He was Mayor then and read a proclamation naming December 11th officially John Feehery day.

That was definitely a highlight.

Washington is always a partisan place, but Washington’s partisanship has seemingly infected the rest of the country.  This was especially pronounced after the election of Donald Trump.

I remember having a conversation with my mother about a year before the 2016 election that big change was coming to Washington, and that made me much more aware of the possibility of a Trump victory.

The Republican Establishment, which blundered the country into terrible wars in Iraq and Afghanistan and presided over the biggest financial meltdown since the Great Depression, didn’t get that it needed to change to survive.

Trump was that change.  Some Republicans (Vice President Cheney and former Majority Leader Bob Dole) got it and others (the Bush family) didn’t.

That the President finds himself impeached by the House is not at all surprising.

He does things that official Washington despises, like speak truth to power, question the value of the intelligence community, use raw and uncouth language, and fight back against political correctness.

It is, of course, possible that the Democrats could take back White House later this year, but ask any taxi driver in Washington what they think, they will tell you that Trump will win easily.

I take their political acumen over anybody who now appears on the once great, and now embarrassingly partisan Meet the Press.

So, what I have learned over the last decade, is also what I Iearned on the ski slopes.

It is fun to do things, even if you aren’t sure you can do them or do them well.

You have to take risks if you want to be successful.  But they have to be manageable risks.  Going down the slopes at 70 miles an hour was not a manageable risk.

Pursuing the thrill of victory sometimes ends in the agony of defeat.  But never let your loss be the last word.  Always get back up on your skis and try again.

Just don’t go down Hangman’s Trail, until you are good and ready.