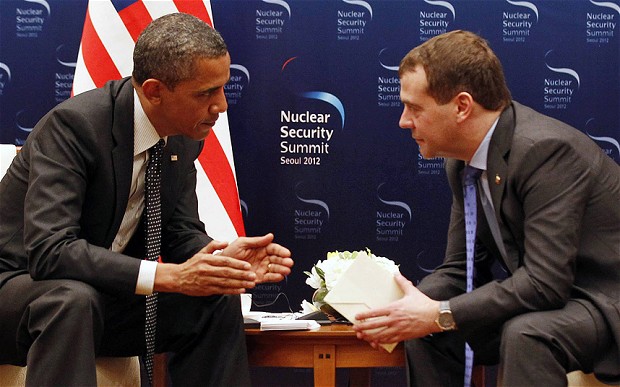 It was Everett Dirksen who said, “I am a man of fixed and unbending principles, the first of which is to be flexible at all times.”

Flexibility is an important, underrated and currently unpopular political attribute.

You need to be able to be flexible to pass a highway bill, keep the government open, and make sure the country pays its debts.

You can’t cut deal without being flexible.

But that doesn’t mean that politicians shouldn’t be accountable.

Accountability is an even more important part of the political process.

Flexibility without accountability leads to despotism.

A political leader who feels he can anything he wants to do without facing the voters is a dangerous leader indeed.

The President told Russian President Dmitri Medvedev that he needed some more flexibility when it came to negotiating away nuclear armaments. Here is his exact quote in a private conversation with the outgoing Russian leader, picked up by a hot mike:
“ “On all these issues, but particularly missile defense, this, this can be solved but it’s important for him to give me space,” Obama said, referring to newly elected Russian President Vladimir Putin. “This is my last election. After my election I have more flexibility,” Obama said.”

This gives us a better sense of where Obama’s mindset is. He currently feels constrained by the American people. He is tired of feeling accountable. He is looking forward to being a lame duck, because it gives him greater flexibility.

In case you haven’t been paying attention, this longing to be a lame duck (to provide himself greater flexibility), is not just constrained to missile defense.

Everybody in Washington knows that we are heading for the mother of all lame duck sessions.

After the November election, the Congress is expected to complete work on its annual spending bills, expiring tax extenders, the expiring Bush tax cuts, the automatic sequester of defense legislation and a host of other unresolved issues.

Indeed, Senate Democrats have made this lame duck strategy the centerpiece of their Senate schedule. I have no doubt that Majority Leader Reid has worked closely with the White House on this lame duck-ageddon.

The President can feel free to hide his true feeling towards defense cuts, tax increases, spending and budgets until after the election is safely behind him.

And of course, after the election, he can take care of other things, like bargaining away our missile defenses (which by the way, makes the Polish very, very nervous).