State of the Union 2012 Edition 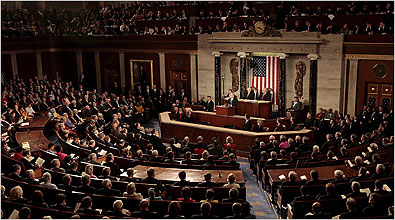 The State of the Union is about at the historical average.

It is a lot better than it was a year ago, but not nearly as good as a decade ago.

A lot of people are working, and a lot of them are working two or three jobs.

The car industry has made a nice comeback.  Everyone thought it was dead, but then the Japanese made some bad cars, and all of a sudden, Detroit is back on top.

Manufacturing is rebounding, although the bulk of new manufacturing jobs are still being created in China.  I’m not sure how to handle that.

Our political system is a little bit of a disaster.  Super PACs, funded by a few rich old men (and women), now have a tremendous (and unhealthy) impact on our political discourse.

Congress hasn’t gotten much done, but maybe that is a good thing.  Congress ought to spend a lot more of its time repealing laws, but if it can’t repeal them, it is probably just fine that it doesn’t pass any more.

The crime rate is still way down, but you wouldn’t know that by watching television or surfing the web.  Nothing boosts ratings more than some good violence.

Obesity is a bigger problem in this country than starvation, and I suppose that is a good thing.  Nobody should starve in this country.  And most Americans should eat a lot less (and yes, that includes me).

Two wars are winding down (Iraq and Afghanistan), and that is a good thing.  It looks like we might be getting into another war (Iran) in the near future and that is a bad thing.

Our society is way too litigious.  We spend way too much money as a nation either suing one another or buying insurance to protect ourselves from getting sued.  Most of these lawsuits are a complete waste of time.

The rich are doing very well, and comparatively, our poor are the richest in the world.  Unfortunately, too many poor people don’t have the skills or the work-habits to compete in a dynamic economy.  We have to find ways to help them help themselves.

Our government is way too big and way too intrusive.   It has way too much power to pry into our citizens’ private lives.  I suppose some of this homeland security stuff was necessary in reaction to the terrorist threat, but my fear is that we sacrificed too much freedom for an illusion of security.  We should look at ways to give people their privacy back.

Our immigration system is broken.   We aren’t going to kick 20 million out of the country.   We should fix the broken system, and do it very soon.

Our tax code is a joke.  I am for a flat rate.   Everybody pays 20 percent.  Mitt Romney and Warren Buffett’s secretary.  Everybody.  We would get more revenue to deal with our huge deficits and we would have some fairness.

So, if you take a long look at our history, the State of our union is right around this historic average.  Despite all of the negativity out there, the sky is not exactly falling.  If you hustle and if  you are smart, you can still make a buck in this country.  You might have to hustle harder and longer, but you can still be successful.  Maybe not Mitt Romney successful, but pretty darn successful.