It Started With Cortes 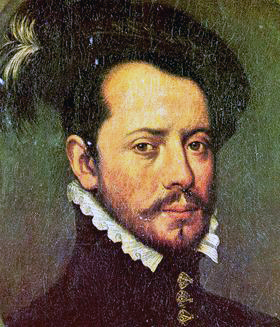 In a strange way,  you can blame Hernan Cortes and his merry band of Conquistadors for the border crisis that has hit our southern border recently.

El Salvador, Honduras and Guatemala haven’t had a particularly easy history ever since the Spanish came to the area in the early 1500’s.

These three tiny countries that once formed the United Provinces of Central America have been independent since the 1830’s.

All three of these countries have had floundering democracies ever since they gained independence.  Sometimes military juntas ditch the democracies and try to run the countries themselves.  Sometimes paramilitary organizations and Marxist guerrilla groups would clash, sometimes civil wars would break out.

But it would always revert to form.  Mostly Mayan, Indigenous and Aztec (and the poor) people would clash with mostly Spanish, European and wealthier ethnic folks in a battle for supremacy.

America has been an intrusive force in the region.  First, it looked out for the interests of the United Fruit Company.  Later, the CIA backed war against communists.  Today, the DEA fights the drug war.

Gangs that now dominate life in these countries were first formed in Los Angeles.

Back in the 1980’s, when the CIA was fighting against the communists, young people fled the region and came to America.  Rather than becoming Americans, they maintained ties to home, got embroiled in drug trafficking, and then formed such benevolent organizations like MS-13.

Many of the most notorious gang-bangers were run out of the United States and sent back to where they came.  Here is what the New York Times had to say about a peace agreement reached between some of the American-born by Central American raised gangs.

“The peace talks involved the region’s two largest gangs, Mara Salvatrucha and Barrio 18, which trace their roots to Los Angeles. Their ranks mushroomed in the United States after young men fled Central America’s civil strife in the 1980s. When many were later deported for crimes in the United States, the gangs formed large affiliates in El Salvador and neighboring countries.

In a string of attacks two years ago that killed more than 16 people, gang members held up passengers on city buses and burned one bus while it was filled with riders. One of the gang leaders brokering the truce was part of a gang that kidnapped and killed the young son of a businessman. Some gang members have served as foot soldiers for drug trafficking organizations based in Mexico.”

There is a long history in this region and in its relationship with the United States and in Mexico.

Mexico has fought its own long-running war against drug-trafficking, cartels and drug runners.  That war is still going on and it is brutal.

Interestingly, Mexico’s immigration policies are even tougher than the United States.  You can travel through Mexico to get to Texas, Arizona, California and places beyond, if you are from these Central American countries, but you can’t stay long in Mexico, unless you are a tourist.

They will deport you in a nano-second.

This crisis has been long-burning and largely ignored by the feckless White House.  President Obama has done nothing to make the situation better, and by his inaction, he has made the situation worse.

His Attorney General has basically thrown in the towel when it comes to drug enforcement inside the United States.  As a result, demand has sky-rocketed.  Where Bob Dylan once sang “Everybody must get stoned,” Obama’s response, “sounds good to me.”

The President has shown not a shred of interest in what has been happening in these three countries.

His rhetoric on immigration reform has inspired young kids to risk their lives to come to America, but when he had control of the Congress, he did nothing.

Now that Republicans control the House, he has asked for immigration reform (and he might get it).  But he has also been unclear of what he will do for the so-called Dreamers.

He has vaguely promised he might do something at some point in time if the Republicans don’t act, but that ambiguity has helped spark an even bigger stampede for the borders.

Of course, it’s not all Obama’s fault.

The immigration system is completely broken, and House Republicans are still on the fence as to whether they should move legislation to fix it.

But immigration reform is only a peripheral issue to how to handle this latest crisis.

First, we need to get more resources to the border region to help house the kids who have been caught at the border.

Second, Obama needs to enforce the law, not just make it up as he goes along.  He should stop threatening to sign executive orders that will only be good for two years and start working extra hard to get a permanent solution in place.  The more he threatens to bypass the Congress, the less interest Congress has in working with him to pass a comprehensive approach to immigration.

Third, we need to rethink our drug policies.  Either we enforce the drug laws we have or we end prohibition once and for all.  The illicit drug marketplace is literally killing our kids and kids in all of Central America.  Either we legalize it all, regulate it and tax it or we go all in on a drug control policy.   This half-assed stuff isn’t working.

Fourth, we have a vested interest in creating stable democracies and stable economies in these three countries.  We should embark on a democratic/free-market mission to help these folks help themselves.  We should cease to be a malevolent actor in the region and work with our allies in the region to create a better partnership.

Fifth, we should make it easier for folks to come back and forth between American and these Central American states.  That way, parents won’t feel the need to bring their kids here and eventually, they can go home to retire.

Sixth, for the folks who live here, we should give them legal status so they can be full participants in our economy.  If we do that, wages will go up for everyone, crime will go down, our economy will be stronger and our streets will be safer.