Special Election Victory is a B.F.D. 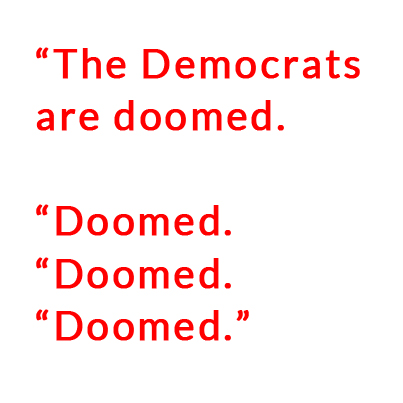 So the lobbyist beat the Obamacare supporter in the special election in Florida?

And the race wasn’t even that close.

Most analysts thought that Sink was going to win for several reasons.

What does this special election tell you about the upcoming year in politics?

This is a big frickin deal.

The Democrats are doomed.

This special election victory for Republicans will spark a further wave of Democratic retirements in the House.  You have already seen George Miller, Henry Waxman and John Dingell pack it in, because they knew the Democrats had no chance of taking back the House.  You will see more of the same, making it impossible for the minority to take back the majority.

The Senate is gone for the Democrats.  That means that Harry Reid will spend most of his time rushing through as many Presidential appointments as he can before the barbarians storm the gates.

It’s kind of like when Embassy staff stuff a bunch of secret documents in the incinerator right before the embassy is stormed.

The problem for Reid and the President is that more and more Democrats, especially vulnerable ones who are up for reelection, are going to want to distinguish themselves from Mr. Obama, and that means more and more of these confirmations votes turning badly against the Majority leader.

Clearly, for any Democratic House Member in a tough seat or any Senator who lives in a red or purple state, voting with the President on Obamacare is a non-starter.  The President is trying to be helpful to these folks by delaying implementation of most of the law, but sadly for the Democrats, that is not good enough.

They need opportunities to vote against it.  The Republicans should now limit those opportunities to make certain that they get something for them.  Why give vulnerable Democrats a life-line?

For Republicans, they now have  to start planning for how they will run operations with GOP control of both the House and the Senate.  Not to put the cart before the horse, but a little planning will go a long way.

And part of that planning process has to include 2016.  How do they set up their agenda so they can be most helpful to their Presidential candidate in the next election?  What items should they get done now (immigration, for example), get done next year (like a bipartisan entitlement reform package) and what should wait for a Republican President (maybe tax reform?).

This special election victory is a big deal the Republicans.   Feel free to over-interpret what it all means.