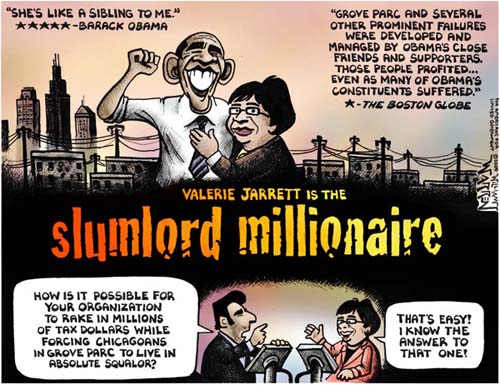 According to Wikipedia, “a slumlord (also spelled slum lord) is a derogatory term for landlords, generally absentee landlords, who attempt to maximize profit by minimizing spending on property maintenance, often in deteriorating neighborhoods.”

The Obama Administration knows a thing or two about slumlords, since the President worked closely with several of them when he was back in Chicago.

Chicago is notorious for its failing public housing projects.  Cabrini Green, a housing project on the Near North Side, was a shooting gallery for most of its existence, and gained national prominence for its high murder rate before being torn down in the last decade.

The Robert Taylor Homes, a group of public housing projects, looked sullenly upon Comiskey Park from across the Dan Ryan Expressway, daring the unsuspecting White Sox fan to wander into its lair and face certain robbery or worse.

Robert Taylor, as I learned in an interesting profile of Valerie Jarrett in the New York Times yesterday, inspired the Robert Taylor Homes and as it turns out, was the grandfather of the most powerful White House aide in the Obama White House.

Jarrett got rich through Chicago public housing, which has been recognized as perhaps the worst public housing system in America.  Her company, called The Habitat, specialized in getting government money to build substandard housing.

The Boston Globe did an expose on public housing in Chicago and had this to say about Jarrett and her associates:

“Valerie Jarrett, a senior adviser to Obama’s presidential campaign and a member of his finance committee. Jarrett is the chief executive of Habitat Co., which managed Grove Parc Plaza from 2001 until this winter [2008] and co-managed an even larger subsidized complex in Chicago that was seized by the federal government in 2006, after city inspectors found widespread problems.  Allison Davis, a major fund-raiser for Obama’s U.S. Senate campaign and a former lead partner at Obama’s former law firm. Davis, a developer, was involved in the creation of Grove Parc and has used government subsidies to rehabilitate more than 1,500 units in Chicago, including a North Side building cited by city inspectors last year after chronic plumbing failures resulted in raw sewage spilling into several apartments.  Antoin “Tony” Rezko, perhaps the most important fund-raiser for Obama’s early political campaigns and a friend who helped the Obamas buy a home in 2005. Rezko’s company used subsidies to rehabilitate more than 1,000 apartments, mostly in and around Obama’s district, then refused to manage the units, leaving the buildings to decay to the point where many no longer were habitable.”

In a nutshell, this is the vision that inspires the Obama White House.

One only need look what is happening to the President’s home town of Chicago to understand how slumlords work.

The city is a disaster.  An average of 14 people are shot a night in Chicago, almost all of them African-Americans.  What has Mr. Obama said or done about that daily carnage?  Nothing.

What has Valerie Jarrett done or said to the President about this situation?

That is how slumlords work.  They don’t invest the time or the resources to fix problems.  They just collect the rent (or in this case, the votes), and let their tenants figure it out for themselves.

The President is going to get over 90 percent of the African-American vote in this election, despite the fact that black unemployment is completely disastrous and the fact that the gap between black Americans and white America is getting worse, not better, under his watch.

Mr. Obama and Ms. Jarrett talk a good game, like any landlord who says that they will get around to fixing the plumbing next week.   But they simply won’t fix the plumbing, or anything else.