Bill Murray’s character in the movie “Ghostbusters,” Dr. Peter Venkman, had the iconic line: “He slimed me!”

The Democratic Party has taken on the role of the Ghosts in “Ghostbusters”: They are all about the slime.

I was on the Ed Schultz Show last night when Ed showed Louisiana Congressman Charlie Melancon’s new commercial against David Vitter, who he is running against for the Senate. 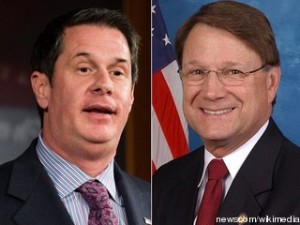 Louisiana has had some tough times lately. It is still recovering from Hurricane Katrina. The oil spill has had a grave impact on the economy. According to some analysts, the job situation down there is reaching Depression type levels.

So what does Melancon choose to focus on? Some old charges about Vitter’s personal life. The commercial, as the progressive guest on The Ed Show, Laura Flanders, admitted, is slimy. But this is par for the course for the Democrats.

In race after race across the country, Democrats are resorting to slime because they can’t win on the issues.

They are bringing up old charges and old allegations against Republican leaders like John Boehner because they know that they can’t run on their abysmal record.

According to Mike Allen: “Senior Democratic Strategists are launching a plan [today] to more starkly and specifically define John Boehner as the symbol of a Republican Party beholden to the old ways of Washington … In a series of ads, web videos, websites, public events, story placements, public events and websites, Democrats are going to explore Boehner's relationships with lobbyists and special interests…”

Why can’t they just fight on the issues? Why can’t they have a real debate as to why they think taxing more and spending more on government is good for the country?

Why can’t they have a real philosophical debate about their unpopular health care law?

Because, they know they won’t win that debate. The American people don’t want to pay more taxes to pay for bigger government. They don’t want to give more power over their lives to Washington bureaucrats. They are scared for the future because they believe that the so-called elites, who have run the economy into the ground, are making things worse, not better. President Obama is seen as the standard bearer for the elite, and that is probably not a very good thing for him.

Sometimes, slime works. This is not one of those times. The American people don’t want slime. They want jobs.

In the “Ghostbuster” movie, Dr. Ray Stantz, the character played by Dan Aykroyd, had a great line about working in a business: “Personally, I liked working for the university! They gave us money and facilities. We didn't have to produce anything. You've never been out of college. You don't know what it's like out there! I've worked in the private sector... they expect results!”

Same with the voters. They expect results but today, all they are getting from the Democrats is slime.