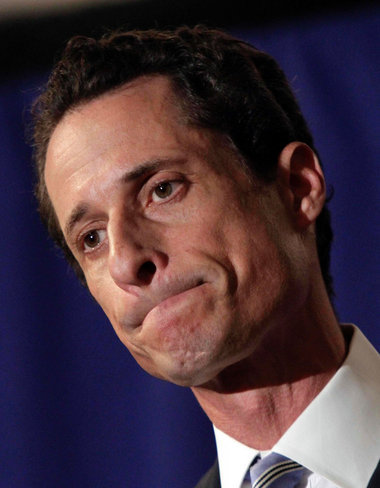 There are more than a few politicians at the federal level who share two conflicting traits: They believe they are the center of the universe, but they also believe that they are anonymous.

That is especially true for Anthony Weiner, but he is not the first and certainly not the last political figure to be beset with controversy brought on by his own stupid actions.

These politicians are not babes in the woods. They learn a great deal about life and about hard-ball politics when they run for office. They are used to people combing through their garbage, pouring over their tax returns, having every inch of their lives examined with a fine-tooth comb.

But somehow, after the campaign is over, they drop their defenses. Or after they have spent decades in Congress, they figure that they are invulnerable.

I have seen so many examples of this in my twenty-two years in Washington, that it simply boggles the mind. When I got here, Jim Wright was leaving. Tony Coehlo retired right before the Feds came. Rostenkowski was convicted. Barney Frank ran into some trouble. Joe Early had his career cut short. Newt Gingrich was admonished by the Ethics Committee.

There was a period of calm, and then James Traficant and then came the Jack Abramoff scandals. Bob Ney. Duke Cunningham. Tom DeLay. John Doolittle. And then the coup de grace. Mark Foley.
In the last year, we have had some doozies. Eliot Spitzer. John Edwards. Chris Lee, and now Anthony Weiner.

From the perspective of a sex scandal, Weiner-gate is pretty low grade. It is hard to call this a sex scandal, because there wasn’t any sex. Virtual sex, maybe. But no real sex. But maybe that is where we are all headed as a society.

Like any scandal, this weenie scandal got most of its juice from the cover-up. And as far as cover-ups go, this was extraordinarily weak. I kind of believed Weiner at the beginning, just because I didn’t think he could possibly be so stupid as to tweet pictures of himself to people he didn’t know. But obviously, I was wrong about that. And nobody else believed him.

Weiner’s problem seems to be coming from his own leadership, specifically, Nancy Pelosi. The former Speaker has limited tolerance for this kind of non-sense (the same can be said for current Speaker John Boehner), so Weiner’s pledge to stay could turn out to be painful for him personally. There is nothing worse then having the Ethics Committee investigate everything you have said and done since you first got elected to Congress.

Those ethics investigations usually stop when a member quits.

We are in a new era these days. Usually, the threshold for quitting came when a member broke the law. If somebody did something disgraceful, like Barney Frank did or Gerry Studds did or others on the Republican side, but there wasn’t proof that a law was broken, a member could hang on.

These days, though, the leaders of both parties have adopted a zero tolerance attitude. That means that Anthony Weiner may try to hang on, but his hand may very well be forced by his own team.