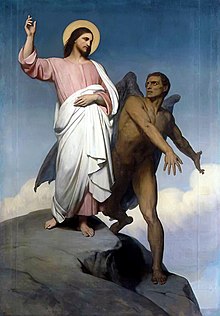 So, when Rick Santorum comes out against the devil, like he did in his speech to Ave Maria University a couple years ago, he was on pretty solid ground.

This is what the Pennsylvania Senator said:  “Satan [has been] attacking the great institutions of America, using those great vices of pride, vanity and sensuality as the root to attack all of the strong plants that [have] so deeply rooted in the American tradition.”   He went on to say that Satan has been “most successful” in attacking academia, but that Satan also has gone after the church and popular culture. Santorum said politics and government would be the next to fall to Satan’s attack. “The body politic held up fairly well up until the last couple of decades but it is falling too.”

Satan has long been a part of world culture and theology.  In the Hebrew Bible, Satan is an agent of God.  God uses Satan to figure out who is corruptible, kind of like what the FBI does when it sets up a sting operation.  The best example of this in action was when God sent Satan down to tempt Job.  Job proved to be very patient though, and very loyal, despite having Satan make his miserable for most of his life.  Job never gave up faith, and God eventually rewarded him.

According to Wikipedia:  “The original Hebrew term, satan, is a noun from a verb meaning primarily to, “obstruct, oppose,” as it is found in Numbers 22:22, 1 Samuel 29:4, Psalms 109:6. Ha-Satan is traditionally translated as “the accuser,” or “the adversary.” The definite article “ha-”, English “the”, is used to show that this is a title bestowed on a being, versus the name of a being. Thus this being would be referred to as “the Satan.”

Most Christians see Satan not as God’s agent, but as a rebellious or a Fallen Angel.   His ultimate goal is to lead people away from the love of God—to lead them to fallacies, which God opposes. Satan is also identified as the accuser of Job, the tempter in the Gospels, the secret power of lawlessness in 2 Thessalonians 2:7, and the dragon in the Book of Revelation. Before his insurrection, Satan was among the highest of all angels and the "brightest in the sky".

In the Islamic tradition, Iblis (the Satan figure) refuses to obey God’s command to bow down before Adam and is thus gets on Allah’s bad side. It was after this that the title of "Shaitan" was given, which can be roughly translated as "Enemy," "Rebel," "Evil" or "Devil". Shaitan then claims that if the punishment for his act of disobedience is to be delayed until the Day of Judgment, that he will divert many of Adam's own descendants from the straight path during his period of respite.  God accepts the claims of Iblis and guarantees recompense to Iblis and his followers in the form of Hellfire. In order to test mankind and jinn alike, Allah allowed Iblis to roam the earth to attempt to convert others away from his path. He was sent to earth along with Adam and Eve, after eventually luring them into eating the fruit from the forbidden tree.

In the Bahá'í Faith, Satan is not regarded as an independent evil power as he is in some faiths, but signifies the lower nature of humans. `Abdu'l-Bahá explains: "This lower nature in man is symbolized as Satan — the evil ego within us, not an evil personality outside."

At the end of the 19th Century, the idea of the devil came under attack from rationalists.

“Demons do not exist any more than gods do, being only the products of the psychic activity of man,” Sigmund Freud once said, and as C. Wayne Mayhall wrote about the father of psychoanalysis, “Sigmund Freud despised religion, theism, and the Bible, and, although his goal was to eradicate the problem of guilt, he is ultimately responsible for confusing it. His primary motivation for psychoanalysis was to transform guilt into neurosis and sin into sickness. Freud believed that guilt must be eliminated through self-analysis and that our struggle to transcend the stifling codes of culture is inescapable unless we are willing to break out of our moral prison. Freud viewed himself as a destroyer of conventions whose purpose was to dissociate guilt from sin, making it a problem for science rather than faith.”

Then the 20th Century happened, and Adolph Hilter, Joseph Stalin, Mao, Pol Pot, and a host of other brutal dictators went on to prove that if the devil wasn’t actually around, these guys certainly were inspired enough by his example to act with a brutality that only Satan could really appreciate.

The idea of Satan is all in the eye of the beholder, though, in the absence of a common and universal set of moral principles.  A holy man, Ruhollah Khomeini, got into the habit of calling America the Great Satan in the last 70’s (right after he inspired his followers to kidnap and imprison American hostages for a few months).   We scoff at the allegation that we are the Great Satan, because our values, which include religious tolerance, free markets, freedom of speech and the press, and democracy conflict with his values of religious orthodoxy and theocratic absolutism.   We say freedom trumps a strict adherence of religious belief.  They call us the Great Satan and we call them the Great Satan.  Who is right?  Well, of course, we are, but that certainly isn’t how they view it.

For Mr. Santorum, Satan makes himself known through sensuality.  As Maureen Dowd pointed out in today’s New York Times, sensuality is a virtue in the mind of most people these days.  Our society is bombarded with sensual images, on television, on the Internet, on hand-held devices (so to speak).   You can’t escape Victoria Secrets advertisements if you want to (and to be honest, I don’t really want to).

Is our world going down the tubes because an excess of sensuality?  Is America in decline because girls parade around in their underwear in an effort to sell products?

Well, sensualism was the bugaboo of the Middle Ages.  And for most of the history of the Church, chastity was exalted as a virtue, while sexuality was condemned as the work of the Devil, and sex itself was banished to the world of obligatory procreation.

But, nobody really buys that any more.  Sex sells.  Sex is fun.  And sex is important for a good and healthy life.  That is the overwhelming opinion of most Americans, at least as promoted by our national media culture.  Modern society likes sex.  All kinds of sex.  And no matter how Rick Santorum might find sensualism to be the Devil’s work, he is in the distinct minority of the voting public.

Saint Thomas said that he considered that the first sin of Satan was the sin of pride.   Politicians, by their very nature, run for office because they are prideful.  They are not a humble lot.

That is why it is best for the politicians to stick to politics and stay away from a deeper discussion about Satan.  Leave the devil to the preachers.