Rubio and the Hispanic Vote 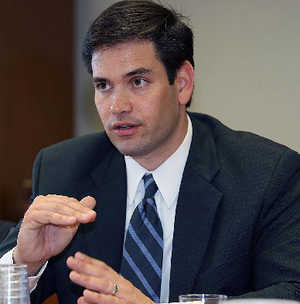 Chris Matthews thought he would get me with his question on Marco Rubio. He asked me, breaking news style, what I thought about the revelations that Rubio’s family fled Cuba two whole years before Castro came to power.

I didn’t scratch my head on camera, but I did so in my mind.

What the hell is the big deal, I thought.

Not knowing a thing about this “breaking story”, I didn’t give much of an answer. I mumbled something about Rubio being a rising star in the party and then the segment ended.

But having read the story this morning, I have a better sense of what is going on here.

The Democrats are desperately afraid that Mitt Romney is going to pick Rubio to be his Vice Presidential candidate, and they are getting the Washington Post to do its bidding.

I don’t know if Romney is going to pick Rubio and I don’t know if Rubio would accept such an offer (he says he won’t), but I do know that the R and R ticket would spell the doom of Mr. Obama and his ill-fated administration.

The Hispanic vote is critically important in this election, and even more important in coming elections. Putting Rubio on the ticket is no guarantee that Hispanic voters will somehow flock to the GOP (in fact, the Cuban vote already swings Republican), but it scares the Democrats enough that they are digging through each inch of the Marco file to see what’s in there.

The Obama Administration is vulnerable when it comes to this key voting bloc. He promised a comprehensive immigration bill, but failed to live up to his promise, and nothing got done on the issue. Instead, he has kicked more Hispanics out of the country than any other President in history (almost half a million). And the Obama economy has hit the Hispanic community harder than anybody else, with the exception of African-Americans.

Republicans have an opportunity, but they have to stop beating the hell out of the immigrant community. The Alabama law is especially offensive (and really stupid, too).

Alabama is not exactly the first choice for most Hispanic immigrants, and they have a pretty low number of them in their state. The Hispanics that are there are critically important to Alabama agriculture sector and they are the only ones who have the patience to work in chicken factories.

Because they couldn’t help themselves, conservative Alabama legislators passed the toughest immigration law in the land, and now all the Hispanics are leaving the state, and going to other places. And now, Alabama farmers and poultry companies have nobody to do the jobs necessary to make their businesses run. Nice going, guys.

I appreciate the idea that illegal immigrants shouldn’t get federal (or state) benefits. If you are in the country illegally, you shouldn’t get welfare, Medicaid, or education benefits. That should be reserved to those who play by the rules.

But going on witch-hunts against illegal aliens and the businesses that hire them seems to me to be a bit counter-productive, as long as they otherwise follow the laws.

Republicans should stick to the message of keeping government benefits away from illegals, which I think is especially powerful with the Republican base, without demonizing and prosecuting non-documented workers who otherwise are playing by the rules.

Marco Rubio is a rising star in the Republican party and on the national stage, and this story in the Post shouldn’t in any way diminish his star-power. But Republicans shouldn’t put all of their eggs in the Rubio basket if they hope to win more Hispanic votes in the future. They have to stop demonizing hard-working people who are doing their best to achieve the American dream.