Right Wing on a Roll 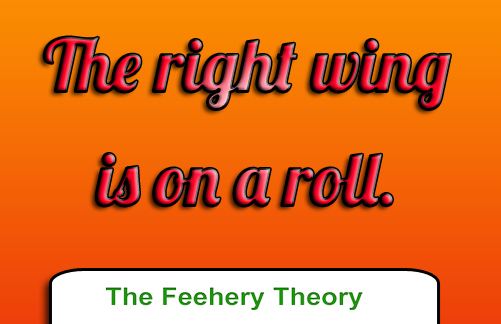 It has been a good couple of weeks for conservative activists.

They have been able to take issues that they care deeply about and get the MSM (or main-stream media) to pay attention.

First, it was the trial of abortion doctor Kermit Gosnell that caught fire.

I noticed on my Facebook page some of my “friends” kept talking about this Philadelphia doctor who killed babies after they were born.  They were complaining bitterly how the trial was not being covered by anybody outside of Philly.

And as it turned out, they were right.  The MSM didn’t cover the story for weeks, especially in Washington.  But late last month, a switch seemed to turn, and the GR888, even Morning Joe would talk about it on their roundtable discussions.

The Gosnell story was grisly and it also put the media (which is overwhelmingly pro-abortion rights) in the terrible position of having to defend the indefensible, which is the destruction of little babies.

But they had no choice.  The man was a monster, and what he did was so despicable, even the most ardent pro-abortion zealot had to admit that fact.

Some activists tried to spin this as a result of what would happen if abortion were made illegal, a curious defense of a barbaric process.  Killing viable babies should be illegal, no matter if they are born or not quite born.

Second, it was the Benghazi brouhaha.

I admit it.  I haven’t been paying much attention to this mini-scandal.  But the right-wing certainly has, as has the families of those who were killed in Libya.

Clearly, the White House put Susan Rice out on the talk shows to lie about what happened.  I don’t know why they did.  It seemed stupid to me.

Is this an impeachable offense?  I seriously doubt it.   There are much bigger fish to fry out there.  And Hillary Clinton did a pretty good job of defending herself several months ago, making Senate Republicans look pretty silly in the process.

But the Administration did more than lie.  They stifled dissent.  They muffled whistle-blowers.  They demoted career civil servants who wanted the truth to get out.

For what effect and for what reason?  I don’t know.  But clearly this deserves closer scrutiny.   And the MSM is on this story, because it might be good for ratings.

Third, it was the IRS targeting of conservative groups.

They complained loudly to the media, who largely ignored their complaints.

But it turns out that all of paranoid protesters were on to something.

The IRS was targeting them.

Amazing how stupid this Administration really is.

They run a very good campaign, those Obama folks.   Governing?  No so much.

The right wing is on a roll.

Maybe next week it will be revealed that the President was actually born in Canada, and not Hawaii.  Wouldn’t that be something?