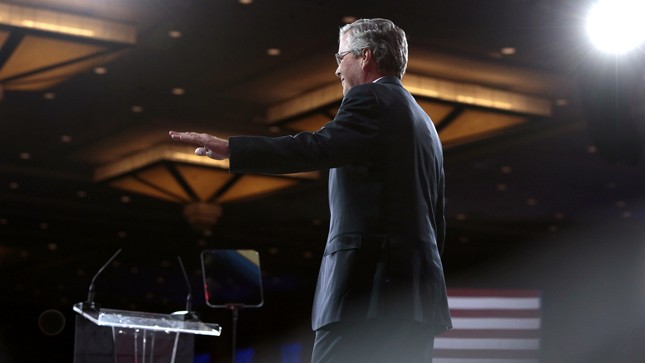 There, I said it.

I think the former Florida governor is the best candidate in the presidential field. He has a deep background in policy. He is smart as a whip. He is plenty tough. And he is conservative, but he’s not angry about it.

But, to be honest, I don’t know what “right to rise” means.

If you have to take more than 10 seconds to explain your campaign slogan, you need to change it.

It could be he is talking about incomes and how they have a right to rise, although that would be really bad economic policy. There’s no sure thing in this world.

In any event, Bush needs a campaign slogan that actually says something that makes visceral sense to the vast majority of the American people. “Right to rise” sounds to me like a jingle for a bread maker.

Ronald Reagan had a great slogan: “Peace through strength.” It said something that the American people could understand, especially in comparison to the disastrous years of Jimmy Carter’s administration.

Barack Obama had a good one, too, with “Change you can believe in.” Voters, amid a market meltdown and the long and increasingly unpopular Iraq War, wanted the country to go in a completely different direction, not more of the same.

Bill Clinton hit the nail on the head with “It’s the economy, stupid.” George H.W. Bush was overly focused on the end of the Cold War, and didn’t have much of a domestic agenda. Clinton hit him hard at his weakest point by focusing like a laser beam on jobs and economic growth, which was nicely summed up in his slogan.

A good campaign slogan says more about the desires of the voters than it does about the candidate.

Herbert Hoover offered a “chicken in every pot and a car in every garage.”

Warren Harding promised a “return to normalcy” after the tumult of World War I.

FDR promised “Happy days are here again,” a campaign slogan that offered hope during the depths of the Depression.

Jeb Bush’s “right to rise” is consistent with his family’s tradition of reforming Republicanism. The first President Bush promised a “kinder, gentler” America, a response, I suppose, to Reagan’s unkind and rough era. The second Bush offered “compassionate conservatism” because he believed that conservatives aren’t all that compassionate on their own.

But in the post-Obama age, the American people won’t need a muted, diluted and mealy-mouthed response to the vacillation, weakness, second-guessing and malaise of the eight years under his administration. It needs a full-throated, vibrant and clear defense of our American values and our American way of life.

America doesn’t need more introspection. It needs a kick in the pants.

And the world doesn’t need America to be just one of the gang, just another country that is one of many in the United Nations. The world needs America to be the last true and best hope of Western civilization, a bulwark against dictators and a defender of freedom and our way of life.

If Jeb Bush wants to win the White House, he should offer a bigger, bolder message that will make the American people feel good about being American again.