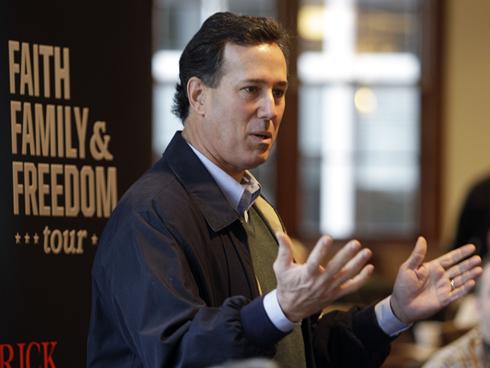 The thing you have to know about Rick Santorum is that he is an Orthodox Catholic.

I don't have a problem with that.

I love the Catholic Church and I wish more people felt the same way.

When a Congressional delegation traveled to Rome to give John Paul II the Congressional Gold Medal (the highest honor that the Congress can give), Rick Santorum was on that trip, as a member of the Senate Leadership.

I was lucky enough to be on that trip too.  It was very emotional for me.  For Santorum, it was beyond emotional.

I like Rick Santorum.  I actually think he lives out his faith.  As some conservatives have pointed out, Santorum is not exactly a small government conservative.  He believes that the government has a role in helping poor people.

He is a believer in social justice, and like any Catholics, he has a little bit of a bleeding heart.

It is interesting that Santorum would be leading in an evangelical State like Iowa.

Evangelicals, by and large, don’t like Catholics very much.

Even evangelical Catholics don’t like Catholics very much.  And the feeling is very much visa versa.

His views probably aren’t very popular with the mainstream media.

It probably surprises a lot of people that Santorum has done as well as he has done in Iowa.  He had no money.  He had no establishment support.  And he got no media attention.

What he did do is camp out in Iowa and keep working it.  That is not sure fire way to win, by the way.  Chris Dodd tried it four years ago and he got not one delegate.

But Santorum has been lucky because the evangelical candidates have all been a complete train wreck.  Michele Bachmann has been a disaster.  Rick Perry has been a huge disappointment.  Ron Paul is way too libertarian for their tastes.

So the evangelicals had to bite their tongue and go with the Orthodox Catholic.   He sounds like them on most issues, and he was the only one really talking convincingly of faith and who knew what he was talking about during the debate.

And the former Senator did do a great job with the debates.  He obviously knows what he is talking about, which is a real plus with this field.

Can Santorum win the nomination?  I doubt it.  If he gets the nomination, can he beat Obama?  Most certainly not.  The country is conservative, but it is not Orthodox.

But Rick Santorum deserves credit.  He has run a good campaign, and he deserves to get his turn at the top of the heap, even if it is only for a few fleeting weeks.