No new taxes. Ever since George H.W. Bush first uttered Peggy Noonan’s words at the Republican Convention in New Orleans in 1988, they have summarized the GOP’s tax policy. 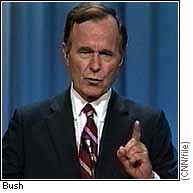 It is time to re-evaluate those three words. Tax policy is too complex to be boiled down to one phrase from a political convention almost a quarter-century ago. And political and policy reality have put Republicans into increasingly untenable tax positions as of late.

Tax cuts aren’t always good, and tax increases aren’t always bad. For example, getting rid of the payroll tax is bad policy. It weakens the Social Security and Medicare trust funds just as the country is getting ready to confront the reality of millions of baby boomers start to retire. On the other hand, fully half the country pays nothing in federal income taxes, a dangerous tipping point that threatens to tear the country apart. Making sure that everybody pays something is a worthy tax increase.

The Obama campaign has implausibly positioned Democrats as tax cutters and Republicans as tax raisers because of the GOP’s understandable reluctance to weaken further our national retirement systems.

The supercommittee highlighted another difficulty with Republican orthodoxy on tax issues. I sat in countless House GOP leadership meetings where our leaders would complain about static scoring, the idea that the Congressional Budget Office wouldn’t score pro-growth tax policies as revenue generators. Now the philosophy of some tax activists is that the Republican Party can’t raise revenues in any way, shape or form, even if the policies advanced are pro-growth. That runs directly counter to the concepts first advocated by the godfathers of the Reagan revolution, Arthur Laffer and Jack Kemp. When Pat Toomey pushed a plan that raised revenue and cut rates, he was attacked by some of his best friends. But Toomey was right.

Republicans have also been put in a tough spot politically when it comes to the Democratic attacks on protecting the wealthy. The rich are never exactly popular as a class, but in this era of the 99 percent vs. the 1 percent, the smaller group is exceptionally vulnerable to political demagoguery. Because the Republicans are so inflexible on taxes, any notion of buckling becomes even more politically devastating to them.

Republicans should consider moving beyond “no new taxes” to a more defensible, if more complex, argument on tax policy. They should start by asking themselves five fundamental questions: Does the tax policy help or hurt job creation? Is the tax policy fundamentally fair? Is it fiscally responsible? Will it weaken or strengthen our country in the long run? Is it easy to understand, administer and collect?

The first point, of course, right now is the most important. Global competitiveness makes reform even more critical. It is no exaggeration to say that our current tax system is the No. 1 drag of job creation in our country.
Fundamental fairness shouldn’t be neglected, though. The left has attacked the rich for not paying enough, and given how successful the rich have been over the last decade, perhaps that is a fair point. But everybody should pay their fair share, not just the rich.

Fiscal responsibility and America’s long-term success go hand in hand. Some might fantasize about Mr. Jefferson’s republic, where the federal government is small and the farms are big. But that pastoral paradise is long gone. We need investment to build broken roads, crumbling bridges and decaying water systems, and we need money to keep our national defense strong. That requires tax revenue.

A final point: A tax code that is too complicated for the taxpayers to understand is not fair and not right. The average Joe shouldn’t be forced to pay $500 to have somebody fill out his tax forms for him.