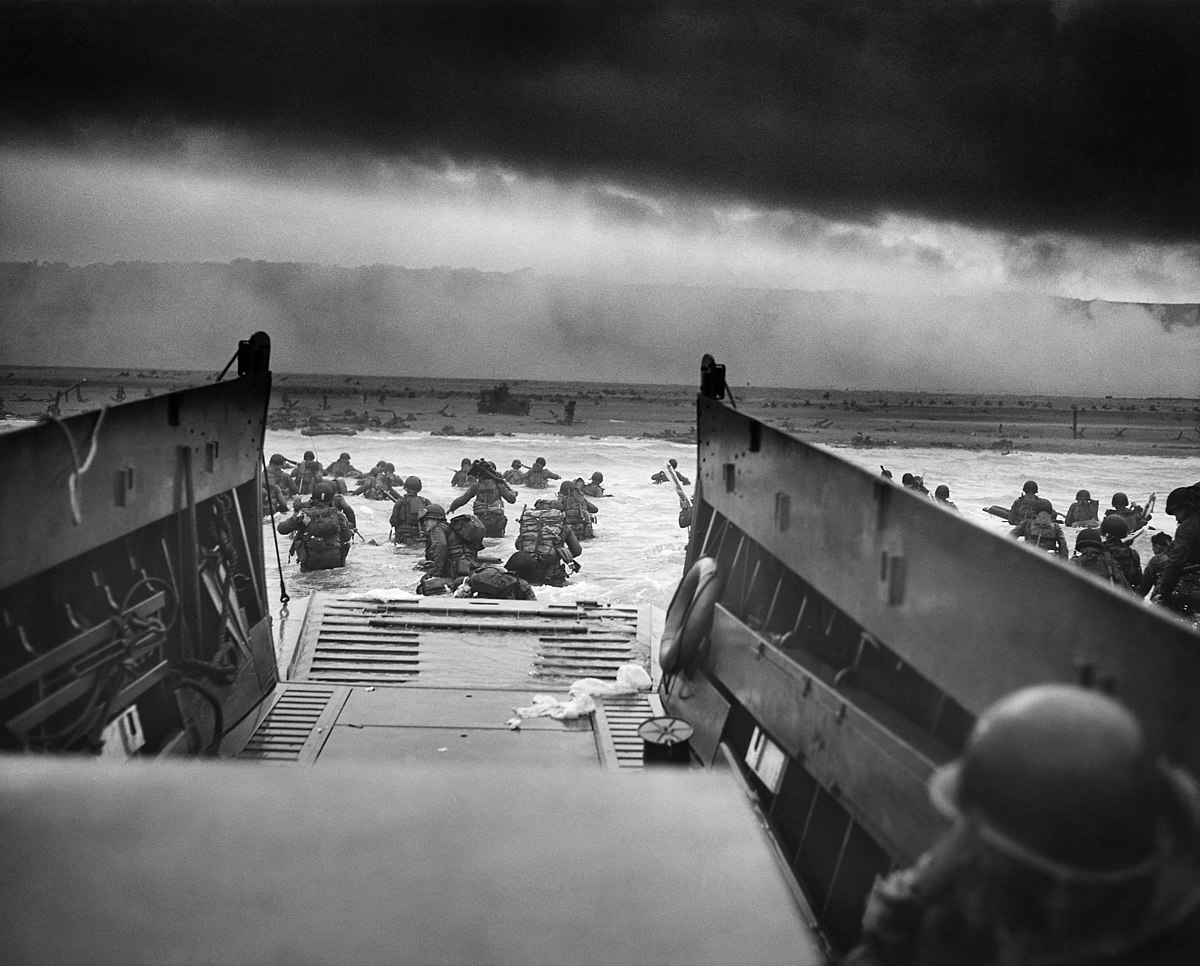 "Into the Jaws of Death 23-0455M edit" by Chief Photographer's Mate (CPHoM) Robert F. Sargent - This media is available in the holdings of the National Archives and Records Administration, cataloged under the ARC Identifier (National Archives Identifier) 195515.

We were in Paris, having a couple of pints at the Harry’s American Bar, when we heard the news.

It had been long rumored that the ailing former President was not doing well.  It had been more than a decade since he slipped from the public eye, battling Alzheimer’s disease in the quiet dignity of his private life.

We were in Paris because it was the 60th anniversary of the D-Day invasion.

Francis Cardinal George, from the Chicago Archdiocese, had asked the Speaker to participate in a Mass to commemorate the event at the Omaha Beach Cemetery on June 5th, the day before the 60th anniversary.

It had been a long day, getting to Normandy and then back to Paris.

And Hastert gave a moving tribute to those who sacrificed their lives in the service of their nation and those who were still living and remembered the day well.  Some of them were still members of Congress.  Here is what he said:

Today we stand in this now peaceful cemetery, on the cliffs overlooking the sea, in this field of white crosses and Stars of David--straight and tall--as if they were young men standing at attention.

Together we have made a pilgrimage to this "hallowed ground''--as Abraham Lincoln would have phrased it--to bear witness to what took place here and to spend, at least a fleeting moment, with our brothers that lie beneath this ground--men who sacrificed on this foreign shore so that we might live as free men and women.

It is our privilege, and our duty, to reflect upon the courage and the heroism of those who were called upon to defend our freedom. We honor those who lie here, but we also embrace those who survived, and returned home to raise their families and to build our nation as a beacon to freedom loving people around the world.

Not far from here, at Pointe du Hoc, are the cliffs they said no man could scale. But they were scaled by determined men with ladders and ropes and grappling hooks in the midst of a merciless hale of bullets and shrapnel.

Twenty years ago, on the 40th Anniversary of D-Day, President Reagan looked out at those cliffs and asked, "who were these men?''

They were ordinary men doing extraordinary things. Men who sought no territory--who sought no plunder--and who sought no glory. They simply came, and many died, so we could live in freedom.

"Where do we find such men?'' asked President Reagan. He knew the answer. Over there--across the sea--in America.

Sixty years ago today, D-Day minus One, what were those young men thinking as they waited to embark on one of the great crusades of the millennium?

In those tension filled hours some found comfort in quiet prayer. Others may have wondered why they were here.

What threat forced these farmers, accountants, factory workers, college students, athletes and assorted other laborers and professionals, to leave their families, their careers and their American way of life?

They knew the answer. Hitler's Germany was that threat.

Hitler's hatred of freedom, his assault on common decency, his brutal murder of millions of his own citizens, and his determination to impose his sick vision of the future on the free world. To end Hitler's regime and restore common decency in the world: that is why they were there.

Operation Overlord, as with the entire war effort, caused great hardship. But out of such hardship was drawn great courage, and from great courage were forged great leaders. Some of that "greatest generation'' returned home and entered politics and went on to serve our Nation in the Congress of the United States.

Sam Gibbons parachuted behind the lines here in Normandy, preparing the way for the invasion that would follow. He would later become a leader on the Ways and Means Committee.  Bob Michel, our beloved leader from Illinois, went ashore here in Normandy and fought the Nazis all the way to Bastogne, where he was wounded at the Battle of the Bulge.

The list of members who served our nation in the Second World War, and still serve in the House of Representatives, is growing ever shorter with the passage of time.  But those proud members--Henry Hyde of Illinois, Cass Ballenger of North Carolina, John Dingell of Michigan, Amo Houghton of New York, Ralph Hall of Texas, and Ralph Regula of Ohio, still bring great honor to the United States House of Representatives.

These Members of Congress and the men of the 1st Division, some of whom are here today, and their millions of comrades-in- arms, understood that the world-wide threat of fascism, if left unchecked, would destroy the free world. They faced that threat and they beat it.

I want to tell you that the "Greatest Generation'' still lives today and like the boys of the 1940s, it has a very young face. They are the grandsons and the granddaughters of those who hit this beach in France or raised that flag on Iwo Jimi or pushed the communists back in Korea or in Vietnam.

How do I know that these young warriors of the 21st century are also part of  "The Greatest Generation?'' Because I have met some of them. I have visited them in hospital wards at Walter Reed and in Landstuhl in Germany.

When you visit these young men and women--some of whom have been severely wounded, and you ask them what they want, you always get the same answer, ``I just want to go back and join my unit, sir, to be with my comrades and do my job.''

It happens over and over again, the same response given with pride and determination. I ask myself, often with tears in my eyes as I walk away, "Where do we find such men and women?'' And I know the answer. All around me. Everywhere I look in America.

Today we face the threat of world-wide terrorism. Like the Nazis of the 1930's, the terrorists of the 1990's were a threat too often ignored.  But like Pearl Harbor, September 11th, 2001, shocked us out of our complacency. As Americans, we love peace, but we love freedom more. So we are facing the threat. And we will beat it.

In war, we often sacrifice some of the best and the brightest to further the cause of freedom. But we also forge the leaders for the next generation.

We cannot know who will be the Bob Michel, or Bob Dole, or Sam Gibbons of this new generation. But they are out there. Perhaps serving today in a remote mountain camp in Afghanistan, or in a village in Iraq, or on a ship at sea.  Their mission is not very different from that of 1944--to preserve the freedoms that we cherish and to restore freedom to oppressed people. They are fighting to make our homeland safe. They are sacrificing for others.

Who are these ordinary men and women doing extraordinary things you ask? I cannot tell you their names. But this I know: They are Americans.

America was at war again.  Over the previous six decades, we had battled Nazism, Communism and now terrorism, and the war against terror was perhaps the most vexing one.  Both the Nazis and the Communists were formidable adversaries, and those battles united America and Western Europe in common purpose.

The war on terror would strain our relationship with the French in particular and other Members of the NATO alliance, and it would eventually split American public opinion, too.  As the end of the Iraq War, both libertarians and liberals would decry American interventionism.

But the death of Reagan helped to remind us at that moment, as we remembered the sacrifices of thousands of Americans (and English and Canadians and French and Polish), who stormed the beaches of Normandy 60 years before in a bid to restore decency to the world, that America is at its best when it does its best.

The Iraq War was mistake, in retrospect.  It was fought under false pretenses.  It was poorly planned in its execution.  It was administered after the initial invasion with arrogance.

In 2004, that hadn’t become obvious, but it would.  The strains in our relationship with our French allies were obvious, though.  Especially in Paris.

But not in the Bar American, where we had a few pints.

It was John Russell, the Chief of Staff to the Chief of Staff, who first told me about Reagan’s death.  “We have to get a statement out,” he said.  And I had to write it, after a couple of pints.  This is what I came up with:

"Of course, I am saddened to hear about the passing of President Ronald Wilson Reagan. But as I grieve, I still gain strength from his grand vision of the world, and America's place in it.

"President Reagan was born in the heartland of America, and his life will always occupy a place in the hearts of the American people. Ronald Reagan grew up in Dixon, Illinois. There he learned the common-sense virtues that would reshape the dreams of a nation.

"When he demanded that the Soviet Empire tear down the wall that stood between East Berlin and the free world, he sent a chilling message to authoritarian governments everywhere. With Ronald Reagan as President, the civilized world would not rest until freedom reigned in every corner of the globe.


He shared the vision of those brave men who risked-and sometimes lost their lives, so that others could live in freedom. That vision lives today. " My deepest sympathies go to Nancy Reagan and the entire Reagan family. The last several years have been most difficult, and the final chapter has finally been written. But while we may close the book on Ronald Reagan's life, we will never close the book on his contributions to the free world. Those contributions are eternal."

Not exactly Shakespeare, but it got the job done.

We put the statement out and then the Hastert team got ready to plan for Reagan’s funeral and all the events that were attached to it.

It is said that politics is war by other means.  But politics, done right, is much, much preferable to war.  Ask anybody who landed on Normandy Beach 60 years ago.