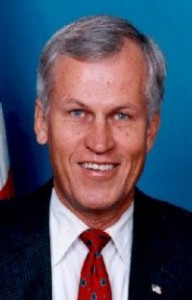 Charlie Stenholm, the former Congressman from Texas, perennially sponsored and pushed for a balanced budget to the Constitution. Charlie was a Democrat, and sponsoring the balanced budget amendment helped him immeasurably in many, many campaigns.

Old Charlie could vote like a Democrat on most things, but sound like a fiscal hawk because he was the sponsor of the Balanced Budget Amendment to the Constitution.

But I have one little nagging concern about the CC and B plan.

What if some of those Democrats in the Senate who are up for re-election in states where a Balanced Budget Amendment would be popular vote for such an amendment knowing that it will never get the two/thirds vote? What if these members decide to sprinkle themselves as Charlie Stenholm Democrats, and then all of a sudden look mighty appealing to independent voters who care about fiscal responsibility?

I can think of a few who salivate over such a possibility. Claire McCaskill, for example, must be very excited to vote for a BBA. She has a little problem with misreporting her airplane income, but all could be forgiven if she were somehow able to re-brand herself as a conservative Democrat. She has already endorsed Bob Corker’s Cap Act, knowing full well that it will never get enacted into law.

Or how about Jon Tester? He has a tough race against Denny Rehberg. A vote on the BBA could give him some conservative street cred. Or how about the Nelson boys, Ben of Nebraska or Bill of Florida? I am pretty certain that if they were given the chance, they would jump to re-brand themselves as born-again fiscal hawks.

Or how about Joe Manchin, Tom Carper, Bob Casey or Kirsten Gillibrand? Nothing better than taking a big issue off the table, knowing that a Balanced Budget Amendment is a great way to look conservative.

This whole exercise reminds me of when Lucy would take away the football just as Charlie Brown would attempt to kick it. That was a running gag during the lifetime of the Peanuts Comic strip. This game that the Democrats will play on the balanced budget amendment is the same thing.

If conservatives want to cut spending, they should cut spending. What they shouldn’t do is help embattled Democrats get re-elected by giving them a vote on the balanced budget amendment as part of the debt limit deal. Why give these guys cover?