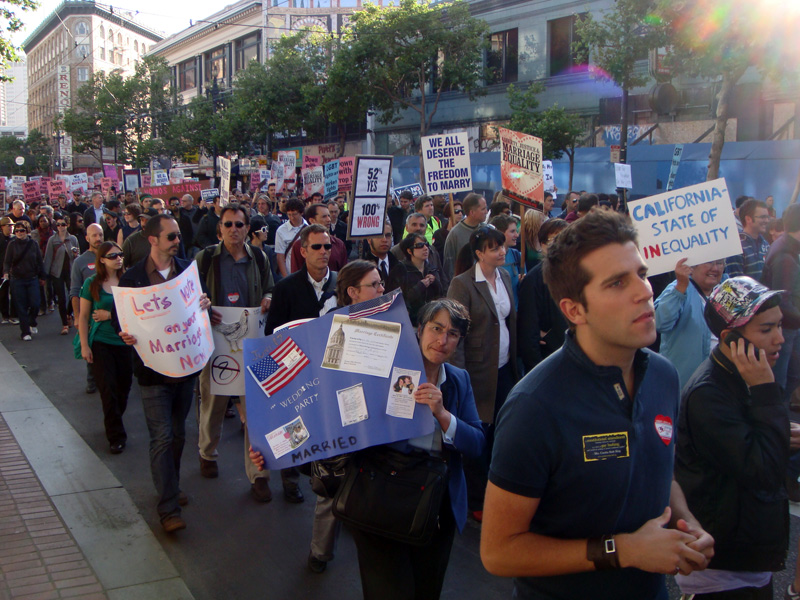 I find the debate about Proposition 8 fascinating.

It has so many real philosophical questions about the nature of mankind, about civil rights, about our constitutional process, about morality in a diverse society, about the nature of freedom, and about demography, all of which will be touched on but not thoroughly addressed in our cable news society.

The way I look at it, the debate over gay marriage poses challenges to our society from a practical, political and process perspective.   Let me explain:

Process:  Proposition 8 was voted on by the people of California.  Backed by the Mormon and Catholic churches, this proposition banned gay marriage in the state of California.  A federal judge, who happens to be gay, ruled yesterday that that law was unconstitutional.   That one person, who obviously has a vested interest in ruling a certain way, has the ability to overturn the will of the people of a state, is a problem, process-wise.  Now, that judge’s ruling will be appealed to an Appellate Court, and then, presumably to the Supreme Court, where it will be argued and then re-argued.  But this is not an isolated incident.  It has happened in almost every location where the people have had a chance to speak.  They don’t want gay marriage.   The Judicial Branch seems to have disdain for the will of the people.   And to me, that presents a bigger problem to our Constitutional system.  It seems very unlikely that the Founding Fathers would have even dreamed of including a right for gay people to marry somewhere in the Constitution.  So, for judges now to read into the Constitution that a gay marriage ban is unconstitutional seems to me to more of an opinion than a ruling with any real legal backing.

Political:  No serious Presidential candidate in either party in the last campaign thought that gay marriage was a fundamental right.  They all expressed serious misgivings with the whole idea.  Barack Obama didn’t support it.  Hillary Clinton didn’t.  John McCain didn’t.  They all knew, from a political perspective, being an active supporter of gay marriage was not a winner.

But attitudes on this issue are changing.  The media is a big supporter of gay marriage, and they have tremendous influence.  Younger voters (and younger people) have a much different perspective on gay issues than older voters.  Younger people are simply much more tolerant of the gay lifestyle.  They see it embraced by the national media.  They have tolerance pounded into them at an early age.

I would venture to guess that President Obama will change his position in time for his re-election.  And I predict that the Republican nominee will be much more tolerant towards gays and lesbians.  The days of Pat Buchanan mocking the gay community are long over.  The fact of the matter is that the gay community is a powerful, wealthy and extremely organized political force.

From a political perspective, while this issue might have short-term resonance for the right, in the long-term, it is a political loser.  Time seems to be on the side of gay marriage proponents.

Practical:  I look at this issue through the lens of demographics and practicality.  Yes, there are moral considerations, but I have a working theory that all of morality is based on practicality.  Why do Arab women wear burquas?  Well, to keep out of the sun.

Why has gay marriage been forbidden for most of the last two thousand years?  Well, because marriage is for procreation.  Be fruitful and multiply.  Gays, by definition, don’t procreate, because they can’t, at least with each other.

For most of American history, having a bunch of kids was an economic necessity.  More kids meant more workers in the field and more money for the family.  It wasn’t an economic burden to have ten kids, it was an investment that usually yielded a healthy return.  And given the child mortality numbers, having ten kids was no guarantee that ten would grow the age thirty.  Usually, the number was much smaller than that.

If the emphasis now is on fewer kids or no kids (as it seems to be), then allowing gay marriage is much less of a threat to society as a whole.  If the average family is only having 1.2 kids, what difference does it make if the gay couple down the street has only one kid or no kids?

A debate about gay marriage necessarily begs the question about homosexuality: Is being gay something that someone is born with or is it a lifestyle choice?  Is it simply the nature of a small segment of society (perhaps 10%) as some would suggest?  Or is it a learned behavior, one that is taught and spreads like the latest trend?

If it is a limited lifestyle, contained to a small segment of society, than it offers no threat to overall health of our society.  If, however, we all decided to become gay tomorrow, than our society is doomed.  After all, the essential problem of gay couples is that they can’t procreate.  And if we don’t procreate, well, nobody is going to take care of us in old age.

In practical terms, gay marriage is a threat to society only if we all decide to become gay tomorrow.  That doesn’t seem very likely.

This debate has all the elements of fire and brimstone on both sides.  Gay advocates like to invoke the imagery of the civil rights movement.  Religious advocates invoke the language of Jonathon Edwards’s sermon “Sinners in the Hands of Angry God.”

I am no theologian, so I am not going to get into all of the religious reasons why homosexuality is bad from the Church’s perspective.  I would make one observation  about my own church, though.  The Catholic Church preaches consistently about loving the sinner but hating the sin.  But the Church, if it wants to regain any kind of moral authority on this issue, has to get its own house in order, not only with the recurring stories of child abuse, which are terrible, but also with the problem of a gay clergy that all too often seems hypocritical and self-loathing.  The Church has to not only preach, it also has to practice what it preaches.  And if it can’t practice what it preaches, it should change what it preaches.

For process reasons, I am against gay marriage.  I don’t want one judge over-turning the will of the people, and reading rights into the Constitution where none exist.  But it is not an easy call for me.  I see true societal advantages to giving gay Americans a chance to enter into a marriage contract, and I really don’t see how having a gay couple live together in a loving relationship is in any way a threat to any other family living on the block.  The idea that gay marriage is somehow a threat to non-gay marriage is, well, ridiculous.

Clearly, American people are not yet ready for gay marriage, and yet, in the future, they possibly could be moved in that general direction.  It is all a matter of practicality, politics and process.