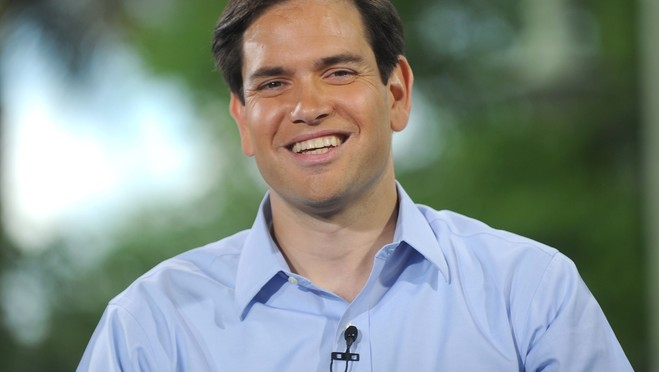 I admit it.   I am a squish on immigration.

While I don’t necessarily love amnesty programs because I think they encourage more illegal immigration, I believe that if you have been here for twenty years and that you have been a good and productive citizen and if you have a bunch of family here, you ought to be given a quick path to citizenship without being forced to leave the country.

I know there are haters out there who hate that position (and probably hate me as a result), but I don’t really care about the haters.

The Republican Party finds itself in a bit of a quandary when it comes to this issue.  They desperately want to do better among Hispanic voters, but they can’t seem to come to grips with the necessity of softening its position on immigration.

Marco Rubio knows better than most about how this issue cuts.  Like his predecessor Mel Martinez, Rubio is a Cuban and a rising star in the GOP who wants to take some common-sense steps forward on the legal immigration.

Mel focused on this issue when he was Chairman of the Republican National Committee, and he actually worked with John McCain and Ted Kennedy to come up with a bipartisan plan.  The result?  Donations to the RNC dried up, and Martinez was viciously attacked from the right-wingers.

According to press reports, Rubio is picking up the dropped baton from Martinez and running with it.  He is working with Jon Kyl and Kay Bailey Hutchison to develop a Republican version of the Dream Act, and to include other provisions that will prop up the American economy by attracting top talent and investment from overseas.

I salute Mr. Rubio for his efforts and I hope that the Republican Party has learned that it can’t just hope that Hispanic voters vote for the GOP because President Obama has done nothing on immigration (and actually nothing to help Hispanics in this country).

The Republican Party can adopt both a pro-immigrant philosophy and a pro-law and order philosophy.  It can welcome immigrants to this country who obey the law and plan on being productive members of society, while being tough on those immigrants who join gangs or promote drug-trafficking.  It can promote policies that make it easier for immigrants to assimilate and get greater access to the American dream.  But it can also work to make certain that immigrants are not exploited at slave-labor wages and make it harder to illegal immigrants to get welfare benefits.

And it can promote policies that keep new engineering and computer science doctoral students in the country instead of requiring them to move back home to our competitors.

I think that is where Rubio is trying to take the GOP, and for that I give him a big thumbs up.