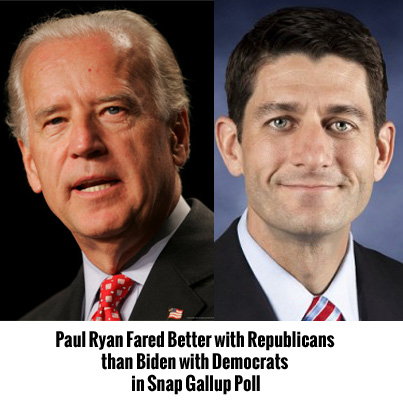 While USA Today and other liberal media outlets today were spinning the snap Gallup poll about Mitt Romney's pick of Paul Ryan in a negative light, data within the poll itself show that Ryan fared better with Republicans than Biden did with Democrats in 2008 in a similar snap Gallup poll in August 2008 just after Obama's announcement of his running mate.

From the Gallup.com news release (emphasis mine):

Despite Americans' muted reaction to Ryan in general, the Wisconsin representative and Republican House Budget Committee chairman may be relatively effective at firing up the GOP base this fall, as 39% of Republicans at this point consider him an "excellent" choice. That compares with 34% of Republicans calling Sarah Palin an excellent choice in August 2008 and 18% rating Dick Cheney excellent in July 2000.

On the Democratic side, fewer than 30% of Democrats rated Joe Biden this well in August 2008 (28%) or Joe Lieberman in August 2000 (23%). Only John Edwards in July 2004 elicited more excitement from members of his own party, with 45% calling him an excellent choice.

Yes, 29 percent of respondents in the Gallup poll felt that Ryan was not qualified to serve as president should it become necessary, but that's the same percentage of voters in 2004 who thought that one-term senator John Edwards was unqualified for the Oval Office, and Edwards was much better known by the electorate in part because he was a candidate in the Democratic primaries in 2004.

Since Ryan is so relatively unknown, it's unsurprising his approval ratings in a one-day reaction poll immediately after the VP announcement would be relatively low. All the same, there are data points in the poll that are sanguine for Republicans, even if the media are loathe to acknowledge them.