The Passing of Jim Jeffords 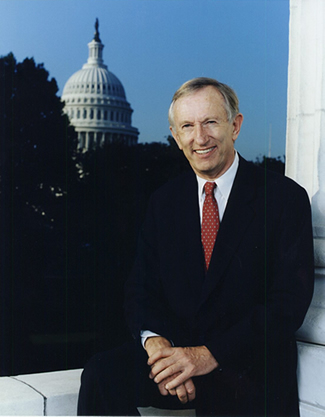 In the opening months of the 107th Congress, with the House firmly in Republican hands but the Senate tied fifty-fifty, rumors started flying.

Was somebody going to switch parties to give one party or the other firmer control of the chamber?

Republican leaders tried to entice Democrats like Zell Miller and John Breaux to join their side.

Jeffords, increasingly uncomfortable with the rightward tilt of the GOP, started to listen.

He was an environmentalist.  The Republicans hated the green movement.

He disliked the deep tax cuts offered by President Bush.

And there were some government programs he liked that Republicans didn’t fully appreciate or support.   One example was IDEA.

He sponsored the IDEA Act in the House and then fought to keep it funded.

If your kid has autism, the reason he gets the public schools to pretty much take care of all of his counselors and teachers, is because of the IDEA.

Before IDEA, most kids with disabilities, and that includes kids who were blind, deaf, or had any kind of other mental or physical problem, were relegated to an inferior education, if any education at all.

As you can imagine, this government program costs a lot of money, and Jeffords wanted to make certain that the Federal government paid its fair share.  He didn’t want another unfunded mandate.

One of the principle reasons that he opposed the first round of Bush tax cuts was because he thought it would drain the Treasury of resources to pay for this important government program.

Once Jeffords became an independent (in name only, as he caucused with the Democrats), he felt free to oppose the President and his agenda.

He allowed the Republicans to pass the reconciliation bill that included the tax cuts, but after that, he became a critic of the Administration.

He voted against the Iraq War, for example, a vote that looks pretty prescient in hindsight.

Jeffords served active duty in the Navy right before the Vietnam War and served in the reserves up until 1990.  He was no anti-war nut case, and while his vote was unpopular among many Republicans, among many members of Congress who were veterans, like Daniel Inouye, Duncan Hunter and Ron Paul, it was a vote of conscience.

What Jim Jeffords did best was vote with his conscience.  He didn’t always do the politically popular thing.  He didn’t always do what his political party wanted him to do.    But he did do what he thought was right, and in the bright glare of history, it becomes more and more obvious that his voice should have been listened to more than it was.

On some big issues, I disagreed with him.  But that doesn’t mean I don’t admire him for his service to the country, and for the fine example of leadership he provided the nation.

Jeffords died the other day after a long battle with Alzheimer's, a terrible and debilitating disease that robs a person of his (or her) memory.

He might have not remembered what he did or why he did it, but for those of us who remember his service to his country, we shouldn't let it be forgotten.

In this partisan world that we live in, it is hard to imagine that we would see anybody like Jim Jeffords in the Senate ever again.  But hope springs eternal.