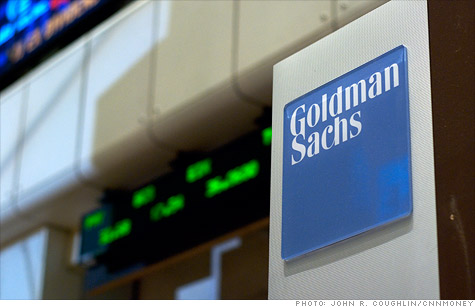 Sanjeev Mehra, Chairman of the Board of Hawker Beechcraft and a top executive at Goldman Sachs was memorably quoted as saying “the rumors of the death of private equity are premature.”

As one of the most prominent private-equity bankers in the world, Mehra is an expert in the field.

Goldman Sachs, his company, has made billions of dollars investing in struggling companies, turning them around or selling off their assets, and in many other ways trying to make a buck.

But when their investments turn bad, they have no problem going to the government (any government) to get bailed out.

According to USA Today, “Goldman Sachs received a $12.9 billion payout from the government's bailout of AIG, which was at one time the world's largest insurance company.”

According to Wikipedia, “Goldman also received a $10 billion preferred stock investment from the U.S. Treasury in October 2008, as part of the Troubled Asset Relief Program (TARP).”

Goldman Sachs has been involved in all kinds of other financial meltdowns.  They have been blamed by many experts for the budget shenanigans that helped spark the Greek debt crisis, for example.

So, it should come as no surprise that Goldman is involved in a contentious fight over the selection of an airplane to help transition the United States out of the conflict in Afghanistan.

The United States Air Force wants to buy a cheap, durable and effective aircraft to give to the Afghani military to help them fight the bad guys.

The U.S. Air Force had specific instructions for the competition.  The plane had to be non-developmental and in-production, which means it had to be ready to go from day one.  It had to work.  It had to be easy to use.  And it had to have track record of service providing air support and reconnaissance.

Hawker Beechcraft, half-owned by Goldman Sachs (and half-owned by a Canadian investment bank), decided that it needed a lifeline from the government. So they decided to enter into the competition the AT-6, an updated version of the T-6 Texan, which is widely used by the military as a training aircraft.  They figured they could fudge the little detail that only two AT-6’s exist in the world, both of them prototypes and have never been in combat.

Beechcraft wasn’t the only one to enter the competition, much to its chagrin.  Sierra Nevada Corporation teamed with the Brazilian airplane manufacturer, Embraer.   Embraer’s plane, the A-29 Super Tucano, was the perfect choice for the competition, because it fulfilled all of the criteria.

It wasn’t a developmental plane, like the AT-6.  It has actual combat experience, unlike the AT-6.   And, according to pilots who flew both planes, it handled better, it could carry and drop weapons, and was a better choice for the mission.

The folks at Goldman Sachs and Hawker Beechcraft didn’t like what they were hearing from the folks at the Pentagon, so they decided to launch a bogus campaign against Embraer.  They railed against the Brazilians, made wild claims about Brazil’s relationship with Iran, they accused Embraer of selling planes to the Iranian military (true, but that sale was made in 1989, when Ronald Reagan had just left office), and worse they accused the Obama administration of exporting jobs to Brazil for this program.

That last claim is especially galling, especially if you live in Jacksonville, Florida, where the Super Tucanos will be made if the contract should go through.

Hawker Beechcraft has made no secret that it is closing production in Arkansas and Kansas and moving it overseas.  In fact, it has been laying off U.S. workers and expanding its operations in Chihuahua, Mexico.  So far, they’ve moved about 1,000 U.S. jobs to Mexico.

And company CEO, Bill Boisture, was quoted as saying in Fortune Magazine that he is in talks with Chinese officials to create jobs there.

Undoubtedly, the folks at Goldman Sachs who worship at the altar of private equity, see the writing on the wall when it comes to the future of Hawker Beechcraft.  What they see is more jobs in Mexico and China, and less jobs in Wichita and Salina, Kansas, and Little Rock, Arkansas, all places where employees were told to hit the road.

In fact, the Goldman Sachs investment in Hawker Beechcraft is not working out well.  There are all kinds of rumors of its impending bankruptcy, as creditors worry that the company can’t keep up with the competition.

And so, what does Goldman Sachs do when it faces a possible loss.  It seeks a bailout from the Federal government.

That is what Goldman Sachs and Hawker Beechcraft want to happen.

But the Pentagon is resisting this bailout.  They have declining budgets and they can’t afford to buy planes that aren’t built specifically for the mission.

At the end of last year, the Air Force disqualified the Hawker Beechcraft entry and awarded the contract to Sierra Nevada and Embraer.  Hawker Beechcraft and Goldman Sachs first went to the GAO to complain, but the GAO took one look at the facts of the case and rejected their pleas.

And now, they are taking their case to the Courts.  When that lawsuit is thrown out, as it most likely will be, they will try to take their case to Congress.

They figure that Congress might be susceptible to good old-fashioned demagoguery and Brazil-bashing. And they might be right.

But my guess is that the Congress is sick and tired of bailouts and when they hear that the team of Goldman Sachs and Hawker Beechcraft didn’t even offer a plane that qualified for the competition, they too will not intervene.

At least I hope so.  The American people can’t afford any more bailouts and Goldman Sachs certainly doesn’t deserve them any more.

I have been doing some communications work on behalf of the Super Tucano, which is how I stumbled on to this story.  I don't usually blog on behalf of clients, but I found the willful misinformation put out by the other side to be so infuriating, I couldn't resist weighing in.  I hope you all don't mind.