To the untrained eye, Mick Mulvaney’s departure as White House chief of staff and appointment as the president’s special envoy to Northern Ireland might seem to be a bit curious and a big demotion for the former congressman from South Carolina.

But those who know Irish politics understand that this new assignment is very important to the United States and that Mulvaney is well suited to take it on.

For his entire time in the White House, Mulvaney has developed deep relationships within the Irish government and with key actors in Northern Ireland. These relationships became critical as Great Britain negotiated its departure from the European Union and created a special status for Northern Ireland and its border with the Republic. 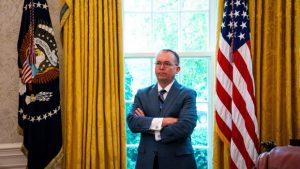 Most analysts expect that Great Britain and the United States will start negotiating a free trade agreement once the dust settles on Brexit. But any FTA must acknowledge Northern Ireland and the reality of the all-Ireland economy, a reality that some negotiators might want to ignore. It all gets very complicated.

Ireland has done well over the last decade, bouncing back from the dark days of the 2008 financial crisis. Unemployment is at historic lows, property values are at historic highs, and growth is the strongest of any country in Europe. Multi-national corporations from around the world, especially the United States, choose to headquarter in Ireland because of its highly trained workforce and its very favorable corporate tax rates. Those corporate tax rates cause heartburn in Brussels, but all political parties in Ireland support them, even the left-leaning Sinn Fein.

Northern Ireland has a good story to tell, as well. They have a highly educated population, a favorable regulatory regime and increasingly close economic ties to their island neighbor. But they also have the lingering legacy of the Troubles, pockets of persistent economic hardship, border communities that lack access to any infrastructure and a fragile political structure that hasn’t been functioning for over three years.

The Good Friday accords, negotiated by George Mitchell, another special envoy from the United States, are the basis for the current power sharing agreement in Northern Ireland. It has been two decades since that agreement was reached, and for the most part, they have held up pretty well. That the United States was central to bringing an end to the Troubles was no accident. No other country has the ability to serve as an honest broker to both sides, a role that continues to this day.

Making sure that the United Kingdom continues to vigilantly honor the Good Friday accords is one of Mick Mulvaney’s central tasks. Another is to make certain that Ireland doesn’t get ahead of itself when it comes to talk of a unified island. Sinn Fein, the dominant Catholic political party in the North, surprised observers and gathered the most votes in the last election in the Republic. Talk of a new border poll, a vote to see if the majority in the North would want to unify with the South, immediately ensued.

But time is not ripe for those discussions. Let’s see how things develop in the post-Brexit world first.

Mick Mulvaney, whose grandparents hail from Country Mayo, knows the players and knows the issues that separate them. He knows that America must play the indispensable role in continuing to broker peace and to make sure that Ireland as an island succeeds both economically and socially.

Serving as chief of staff to President Trump undoubtedly had its challenges. This new assignment will prove to be challenging too.