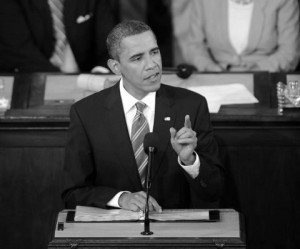 Like the audience that was arrayed in front of him, the President’s State of the Union address was all mixed up in ways that made it unconvincing and inauthentic.

Nobody really believes that Congress is going to play nice with one another once this speech is forgotten (and it was a forgettable speech), and frankly, nobody outside of Washington really cares. What they would like to see is Congress doing something that gets the government out of their lives, makes it less costly, and makes it more honest. But that probably isn’t going to happen anytime soon. And no matter where the Senators sit during the State of the Union, it doesn’t matter if jobs don’t come back.

The President hurried through the speech, as if he just wanted to get it over with. He made several technical errors and gaffes. Had he been a figure skater, Dick Button would have been horrified.

And he spoke often against himself. He praised the fact the he extended tax cuts for everybody then later he complained about how tax cuts for the rich were extended. He said that we would have to take responsibility for our deficit and then he proposed a new “Sputnik” type program which would most assuredly cost billions, if not trillions, in new spending. He called for a freeze in spending, but forgot to mention that he wants to freeze the spending level at the artificially high spending levels left behind by Congressional Democrats. He called for new tax breaks and then he called for a reform of the tax code. He said that he was willing to look at changes in the health care law, but in the next paragraphs, he made clear he wasn’t willing to make any “real” changes to his law. He praised the work of the Deficit Commission that he appointed and then he made clear he wasn’t going to support most of their recommendations. He said we should come up with a plan to save Social Security and then made clear that he wouldn’t support benefit cuts or private accounts.

Of course, he couldn’t pass up the cheap shots. He blamed lobbyists for the state of the tax code. He called for bipartisan action on tax reform and tax simplification, without really spelling it out in any way. He said that we need to reform government, blah, blah, blah. He came out against earmarks (of course he did).

But the speech was flat. He didn’t have his heart in it. It was a tactical speech, not an inspirational speech. It was a mish mash of contradictory thoughts, and internal compromises, meant to give voters the illusion that he was moving to the center politically.

It wasn’t very convincing though. He didn’t speak from the heart. And it didn’t seem like he truly believed anything he was saying. Which means that we didn’t believe it either.