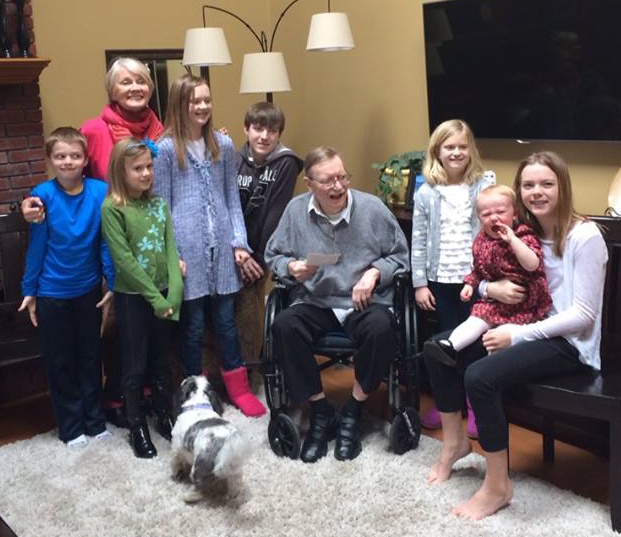 My Dad turned 81 today, so I thought I would repost this from last year:

My brother Brian hosted a party for him at his house in the Chicago suburbs and the DC Feeherys flew in to help him celebrate.

Eight decades can be hard on a body and for my father the last couple of years have been pretty rough.   He has a form of Parkinson’s, the kind of disease that makes it awfully hard to get around and to perform basic functions.

He really can’t take care of himself and so he is staying at a Veteran’s Retirement home.

He doesn’t really like it that much, but when you get to the point in your life where you need help to do just about anything — 24 hours a day and 7 days a week — this retirement home is about as good as any place in the world.

The State of Illinois doesn’t do many things right, but the Manteno Veterans Home is one of them.

There is a long waiting list to get in, and you have to be able to prove that you served in the military overseas.

My dad served in Korea in the aftermath of the conflict between the Communist North and the non-communist South.

He doesn’t over-hype his service there.  He likes to say that the only fights he participated in were against the British in the saloons of Seoul.

But South Korea, after the truce was signed, was still a dangerous place, and tensions were palpable and sometimes deadly.

During the birthday party, we all looked at some of the snapshots Dad took of Korea back in the mid-fifties and then pictures he took at the 50-year anniversary of the end of the conflict, when he traveled back and took part in some of the festivities.

The progress in South Korea is nothing short of remarkable.   If you ever want to see the clear differences between communism and capitalism, look that the aerial photographs of North and South Korea at nighttime.  South Korea has electricity pulsing throughout the country.  North Korea is a dark, dark place.

Jack Feehery enlisted in the Army before he went to college, and when he came back from the service, he attended Notre Dame, his father’s Alma Mater.

Ed Feehery, my grandfather, played baseball for the Fighting Irish, and is in Notre Dame’s Hall of Fame.

His son had seen and did much in his years in Korea and he wasn’t quite willing to sacrifice his freedom to the strict discipline of the Notre Dame college campus.

I suppose that when you see the real world in places like Seoul, South Bend can seem pretty boring.

In any event, my father lasted for about 18 months before he left Notre Dame.  He eventually enrolled and graduated from Loyola in Chicago, a commuter school, where he could pretty much do whatever he wanted when he wasn’t on campus.

I don’t know where my Dad got his interest in journalism, but after graduating from Loyola, he worked in the morgue for the Chicago Daily News, the afternoon newspaper made famous by Mike Royko.

From there, he migrated to Advertising Age, where he gained his chops as a reporter.

As many reporters then and now often do, he decided he had to make some money and went to the dark side of corporate communications.   Like any father who had higher aspirations for his kids, he wanted to save up some money to send us to college, which he eventually did.

At the birthday party, my brother brought out a copy of my Dad’s last column that he wrote for one of Amoco’s internal newspapers.

He wrote about the role of corporate communications within an organization as big as Amoco.

He told the story of a business unit within Amoco that was rumored to be on the chopping block.  Employees, worried about their future, agitated for information.  Productivity declined.  Tensions increased.

The manager of the subsidiary asked my Dad his advice on how to handle the situation.  In typical Jack Feehery fashion, he told the manager to tell the truth.  He advised him to use the tools available to the organization, which was the internal newsletter.  And my Dad sat the manager down, asked him the tough questions that were on the minds of all of the employees, wrote up the responses, and published the article for everybody to read.

The result?  People got the answers they were looking for, tensions eased and the life moved on.

Sometimes, the truth works.  And what my father discovered, after his more than 30 years in corporate communications, that while getting to the truth was often hard to do, especially in a Big Company environment, it was liberating and usually made for the best public relations.

When I moved to Washington, close to 25 years ago, I took the lesson that my father taught me to heart.    And I have tried to always to be true to the truth as I see it.

I learned how to write from my father.  One of the more unpleasant experiences I had as a young high school student was to have Dad edit one of my term papers before I handed it in.

Note to all high school students:  Avoid having a real editor edit your high school term papers if you want to have shred of dignity at the end of the process.

Jack Feehery was a hard-ass on grammar.  He used to mercilessly needle my brother Jim when he used words like irregardless, which, of course, is not a word.  He hated when as teenagers, we would over-use the word “like.” He mocked us when we would call things “awesome.”

Of course, my Dad was instrumental in helping me get to Washington.  His colleagues, Kent Barry, who once worked at the Energy Department in the Reagan Administration, and John Coyne, a former speechwriter to Spiro Agnew, teamed up to call in some favors for some friends, and eventually, I landed an internship with House Minority Leader Bob Michel.

I was lucky to work for Leader Michel, because he shared my father’s obsessive reliance on the truth.

An 80th birthday party is a celebration tinged with a bit of sad nostalgia.   Some of my Dad’s closest friends were there from the old neighborhood, but others didn’t make it to 80.

Life is funny that way.  Some of the octogenarians looked like a million bucks.  Other looked all 80 of their years and then some.

At the end of the party, as we cut the cake, we all sang the Leo Fight song.  It’s a family tradition, because my Dad went there, my Mother’s father went there, my Uncles went there, and whole bunch of South Side Irishmen went there.

Leo High School is still around, although the ethnic composition is no longer pale white Irish.   I don’t know how many Irish Christian Brothers teach there these days.

For those of you who aren’t from Chicago, Leo High School opened its doors in 1926 (and Ed Hurley, Mom’s dad, was one of the first to walk in those doors), and became a football powerhouse.

Dad graduated in the early 50’s, so he missed all of that excitement.   But he still could belt out the Leo Fight song on his 80th birthday:

Oh, when those Leo men fall into line,

And their colors black and orange
are Unfurled,
You see those Brawny stalwarts wait

And spirit of our team’s attack,
For with every heart and hand,
We will fight as one strong band,
For the honor of the orange and black!

Jack Feehery is one of the best of the Leo men, and although he isn’t very brawny these days, he certainly has been and continues to be a stalwart for the truth.